re: 2022-23 Basketball MegaThreadPosted by King

on 8/10/22 at 8:53 pm to Clark14
Exciting times. I love being able to really look forward to Basketball again. It's overshadowing football.
Back to top
Reply
Replies (1)
OptionsTop
Replies (1)

I agree, though I think our football team will do well, our best chances for nattys are in basketball and baseball.

I do love where Sam has us going but it’s a tougher hill to climb.
Back to top
Reply
Replies (1)
OptionsTop
Replies (1)

quote:
It will be hard to do anything in the SEC in football while Saban is around. Its just the sad, hard truth.

on 8/11/22 at 6:08 pm to SmackoverHawg
We might beat them. But likely not. We can't whip them physically, but we can compete for a while. We would have to out gameplan them to beat them.
Right now, they have too much talent and too much depth comparitively. And their coaches are pretty good too. I'd say we might have a 30% chance. But, upsets happen every year... I will be watching and hoping for one.
This post was edited on 8/11 at 6:09 pm
Back to top
Reply
Replies (1)
OptionsTop
Replies (1)

Working on my Final Four and Sugar Bowl tickets now.
This post was edited on 8/11 at 9:40 pm
Back to top
Reply
Replies (0)
OptionsTop
Replies (0)

How fantastic is our coach though? Damn.
Back to top
Reply
Replies (1)
OptionsTop
Replies (1)

quote:
Barry Dunning is the first player Coach Musselman has ever had send him a scouting report.

As soon as he got to the hotel, Dunning watched film and sent notes to Musselman.

Knew Barry was gonna be a great player, before he got on campus he called and asked questions for over an hour just to be prepared for what was to come. @BarryDunning6 keep goin!

to Everyone
Advertisement
Back to top
UltimateHog 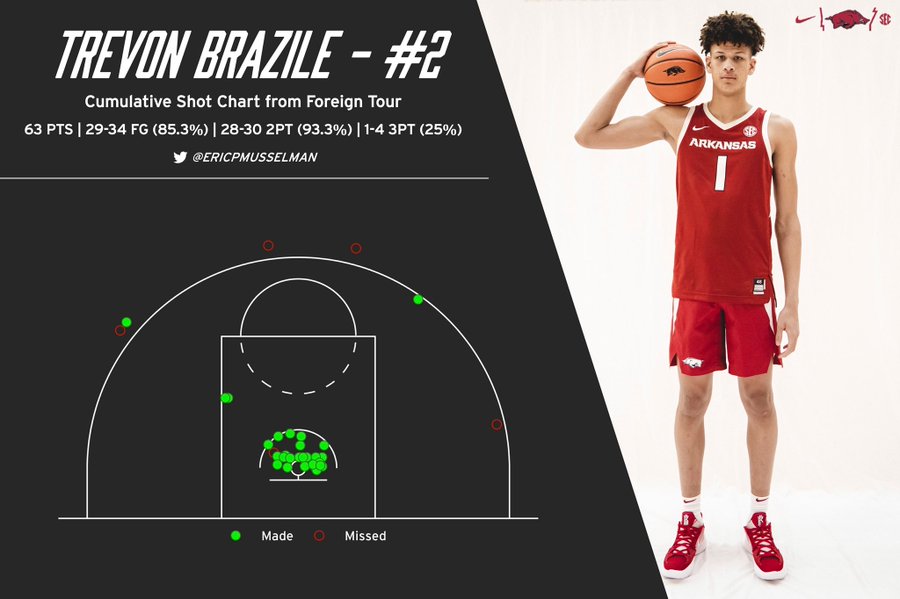 on 8/16/22 at 8:07 am to UltimateHog
Man I agree. I think Nick is the best player but Brazille is the clear 2nd best so far. Hats off to you for calling it when he committed. I didn’t expect him to look this good
Back to top
Reply
Replies (0)
OptionsTop
Replies (0)

quote:
All I know is Trevon Brazile may be our best player. Still can't believe we got him.

I said this in the game thread but if he develops a respectable/consistent deep shot that makes defenders honor it, he is a top 5 pick for sure.
Back to top
Reply
Replies (2)
OptionsTop
Replies (2)

Anthony Black looks the most composed out of all the freshmen. The game and concepts look easy to him. Plays hard on defense, makes the right passes, and can shoot the ball. Musselman will probably ask him to shoot more because he plays extremely unselfish.

Dunning looks like he understands what coach wants. And I imagine he will get significant PT because of that. He has a nice jumper too, and if he can knock down those corner threes at a decent clip it will make us even better.

Smith is the best scorer and overall player, but he has got to take care of the ball. Too casual at times with his handle.

Jordan Walsh is still extremely raw, and has to get better. If he wants to play a lot this year he needs to focus on his defense and ball handling. His offense needs to be similar to Michael Qualls(cleaning up on misses, cutting to the basket, and knocking down corner threes)

Brazille will play just because of his ability on both sides of the floor. Just needs to learn the offense and work on his passing. He's obviously going to start with the numbers he put up. Too much talent to leave on the bench.

Devo will play a lot because he knows what is expected of him. I just hope he can up his offensive numbers. And stop with the stupid turnovers.

Council has played pretty stellar defense in my eyes, and I really like his driving ability. His jumper looks pretty bad, but if he can be a FT attempted type player it would help the team out a lot. He can get to the rim with ease, just draw those fouls.

Mitchell twins are a mystery, one second they look good, and the next second they are missing layups. I imagine they both will get some playing time.

Kamani will play a lot because he knows the offense, makes the right pass, and doesn't back down from anyone.

Jalen Grahm wont see much PT at all. Looks lost out there and extremely unsure of himself.

Pinion and Ford will get mop up time. Maybe get some pt if we are in foul trouble. They just aren't quite as polished as they need to be. Potential is there though
This post was edited on 8/17 at 8:21 am
Back to top
Reply
Replies (0)
OptionsTop
Replies (0)

Smith + Brazille are going to be out there as much as possible. Brazille might get rotated out a little bit more to keep him fresh

Council is another one that has surprised me a little. He's going to play a lot

Walsh will be out there a lot because his skillset is unique. He still has a lot of room to improve but he has showed some flashes.

Black was just slightly underwhelming to me. Smith and Council are better ball handlers IMO. And Devo is about on par with him right now. His size will get him a long way though and he has a higher ceiling than Devo or Council. Early on he might see fewer minutes. He does seem to have a decent 3 point shot so that could change things

Kamani will see the floor although I've never been a big Kamani guy. I think Muss likes him

Kai Mitchell I like better than Kamani but he needs to do more to separate himself. Pretty quiet through 4 exhibition games.

Dunning is the one guy who can fit Walsh's role. And since Walsh seems to be a little out of shape right now, that's going to create plenty of opportunity for Dunning

Pinion. He's not nearly as athletic as the other guards. I know, I know, "white guy" cliche - but it's just true in this case. I see him as a guy that sticks around for a 4 years, and gets good playing time eventually, just not sure about this year.

Ford is in a similar situation. Little bit of a project. Looks fast and I love his high school tape but he just seems a little out of control, on a team that seems to already have some turnover issues.

Graham - seems like he could be the odd man out right now. Doesn't bring the size/strength of the Mitchell twins/Brazille/Kamani. Doesn't have the ranginess/athleticism of Walsh/Dunning
This post was edited on 8/17 at 8:36 am
Back to top
Reply
Replies (1)
OptionsTop
Replies (1)

on 8/17/22 at 11:59 am to The Sultan of Swine
I think as the twins and Graham get the defensive schemes and energy down that Muss expects, they'll eventually displace Kamani. There was a reason why he hardly got any PT on a very shortened roster last year. 6'6" "big men" won't cut in the SEC. He's no Corliss or Grant Williams.
Back to top
Reply
Replies (2)
OptionsTop
Replies (2)

on 8/17/22 at 12:12 pm to Pygthagorean Theorem
I could see that with the Mitchell twins but I don’t think Graham has the physicality to fill that role.

I could also just see us going “small” a lot. 4 guards and Brazille. Quotation marks because it wouldn’t really be a small lineup
Back to top
Reply
Replies (0)
OptionsTop
Replies (0)

Kamani does a great job fulfilling his role. He's not tall enough to be a star big man....but he gets in there and gets aggressive. Throws his weight around
Back to top
Reply
Replies (1)
OptionsTop
Replies (1)

on 8/17/22 at 12:27 pm to oklahogjr
Kamani actually showed some pretty athletic finishing moves around the rim in Europe and fights really hard for rebounds. Had one game with 10/12. He can get out of control too often though.

It wouldn't surprise me if Muss starts him with Brazile at the start of the season until Walsh and Dunning are ready. Those are the main three I see fighting for the last spot in the starting lineup based on the Europe trip.

Devo or Council I can go either way with, both might play around the same amount regardless.
Back to top
Reply
Replies (1)
OptionsTop
Replies (1)