on 5/16/20 at 2:30 pm to phil4bama
I really think that it was here in December and possibly before that.
Back to top
Reply
Replies (3)
OptionsTop
Replies (3)

I agree and if they are admitting to it being here in January then it was more than likely here earlier than that. I had an aunt who passed away just before Christmas that makes me wonder if she might have caught it while in the hospital on a vent. No proof and she was in very poor health to start with but it crossed my mind. Also the numerous accounts of people testing negative for flu while experiencing all the symptoms.

quote:
Outkick the Coverage
@Outkick
“The State of Washington now believes there were people with the coronavirus in their state in December. This means before we locked down in the US the virus was in crowds, athletic events, and probably at the Super Bowl. Its overall impact continues to decline.”—
@ClayTravis

re: Alabama Board Coronavirus Thread - Second Wave Edition? Still No Politics ThoughPosted by RollTide4Ever on 5/16/20 at 5:54 pm to Bobby OG Johnson
Colorado just revised its numbers down by around 200 for deaths.
Back to top
Reply
Replies (1)
OptionsTop
Replies (1)

quote:
More and more anecdotal evidence pointing to coronovirus sneaking into the US as early as January. A couple of cases even suggest December.

California has a CONFIRMED Covid-19 death on 6-Feb.

That's the day she died, not the day she was exposed or developed symptoms. She also didn't have any travel history that would have suggested she was at risk of exposure.

It is a 100% certainty that she was exposed and infected via community spread in California - not Washington state - no later than the middle of January.

If it was in community spread in Cali at that time, it was in community spread in other major cities too. I honestly don't think any curve was flattened much at all. I think what happened in New York was that rocket shot graph that showed what would happen if few or no mitigation steps were taken. By the time anyone at any level, local doctor to WHO and everyone in between, it was already too late.

The WHO says it warned the US of POSSIBLE human to human transmission on 10-January. despite tweeting later that week that it wasn't spread human to human. On 10 January, a 57 year old woman in Santa Clara, California was already dying from it.

In tRant terms, when the WHO claims they first said y'all might want to watch out a little, it could be coming your way antibodies on the west coast for sure and almost certainly nationwide looked up and said:

on 5/16/20 at 10:49 pm to TideSaint
I was OP of the other thread and pretty much quit reading it, and stopped updating the OP, because it had become all politics, conspiracies, etc. Plus, I got to the point that I couldn’t focus on coronavirus as much anymore, just got tired of it.
This post was edited on 5/16 at 10:51 pm
Back to top
Reply
Replies (0)
OptionsTop
Replies (0)

quote:
Colorado just revised its numbers down by around 200 for deaths.

It was closer to 300. There was a recent uproar after a 35 year old guy was classified as a COVID death when he died of acute alcohol poisoning with a .55 BAC. The state agreed that counting such cases was inappropriate and as a result, cases had been overstated by 31%.

Props to the Montezuma County Coroner for calling the Colorado DPHE out over this. The blowback has resulted in an actual, reliable count from the state.

on 5/17/20 at 8:44 am to Evolved Simian
The Navy reported yesterday that 13 sailors who had recovered from he virus had it again. Scary if true.

Could be testing but there is still a lot we don't know about this.
Back to top
Reply
Replies (0)
OptionsTop
Replies (0)

quote:
Also the numerous accounts of people testing negative for flu while experiencing all the symptoms

So I know of 3 people who had all of what we now know to be the standard COVID symptoms back in January. All 3 now swear up and down they had it. All 3 went and got one of the antibody tests. None tested positive for antibodies. Of course, the antibody test may be bogus.

Forgot to mention, they all tested negative for flu and strep.
This post was edited on 5/17 at 9:02 am
Back to top
Reply
Replies (2)
OptionsTop
Replies (2)

quote:
So I know of 3 people who had all of what we now know to be the standard COVID symptoms back in January. All 3 now swear up and down they had it. All 3 went and got one of the antibody tests. None tested positive for antibodies. Of course, the antibody test may be bogus.

Forgot to mention, they all tested negative for flu and strep.

I have chronic sinusitis stemming from some exposure in the military. In Feb what I thought was an infection was far worse then anything I had before and felt like I had the flu at the same time. Usually if I get a flareup I recover in a few days. This time it took around 10 days and even got tested for the flu & strep and came back negative. In April I spoke with my doctor about it and I asked about the antibody test. His comment was that they are not very reliable and present a lot of false negative results. The doc also said they are also finding after about a month of possibly having the virus they are even more unreliable. So I was told it would not be helpful.
Back to top
Reply
Replies (1)
OptionsTop
Replies (1)

on 5/17/20 at 10:01 am to TideWarrior
A federal district judge has issued a TRO blocking North Carolina's rules against religious services. The governor has stated he will not appeal.
Back to top
Reply
Replies (0)
OptionsTop
Replies (0)

to Everyone
Advertisement
Back to top
JustGetItRight

quote:
So I know of 3 people who had all of what we now know to be the standard COVID symptoms back in January. All 3 now swear up and down they had it. All 3 went and got one of the antibody tests. None tested positive for antibodies. Of course, the antibody test may be bogus.

Forgot to mention, they all tested negative for flu and strep.

We were seeing a lot of "flu like symptoms" and pneumonia ambulance calls starting in late December. My usual paramedic partner's girlfriend works at a local urgent care. She was saying they were eat up with "flu" cases in Jan/Feb that were testing negative for the flu. They treated them like it was the flu but now they think it was probably Rona.
Back to top
Reply
Replies (1)
OptionsTop
Replies (1)


I really think TideSaint was the initial carrier who brought it into the U.S. when he returned from Korea. Granny killer!
Back to top
Reply
Replies (2)
OptionsTop
Replies (2) 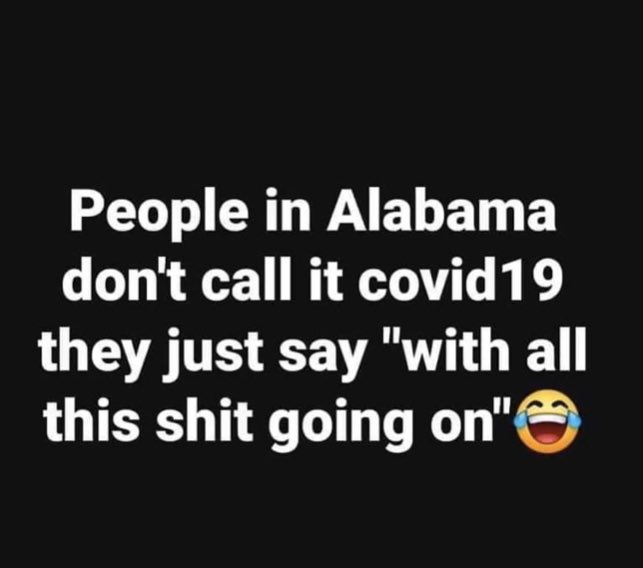 re: Alabama Board Coronavirus Thread - Second Wave Edition? Still No Politics ThoughPosted by wm72 on 5/17/20 at 2:07 pm to Cobrasize

Certainly seems there had to be sporadic cases around the country since late January.

It was in Europe by then and almost every early March documented case in the USA was traced directly to European travel. Makes sense that a lot were missed especially since almost no testing was happening at that point.

However, I don't think there were really widespread infections here before early March. It just doesn't fit with much else we know:


1. Currently, re-opening less affected areas without much travel does not seem to be leading to explosions of new cases. On the other hand, new cases in heavily affected areas are not falling quite as quickly as expected, even with shutdowns.

2. There are just too many instances where a single carrier led to large outbreaks (Albany Ga, New Rochelle NY, concert in Brooklyn to name a few). Just from personal experience, I know that a factory in central/south Alabama is having a nightmarish time keeping their operations open because no matter what steps they have taken so far --short of now attempting to close completely for some days and testing every single employee coming back in-- has stopped it from spreading through the workforce.

So many things like these support the idea that it spreads quite easily and is hard to stop once it has spread through enough people in a community. Yet, shutting down travel between heavily infected areas and other parts of the country seems to have kept cases low enough that re-opening without lots of travel isn't causing explosions.


3. Overall death rates over 20% higher than normal in affected areas beginning in later March also seems to suggest that any widespread infections as early as January would have resulted in those death rates soaring much sooner.

None of that means there were no cases back in January but would suggest that they were very sporadic and not much wide community spread was happening until, at earliest, very late February.

quote:
Boz and I have decided to be much stricter in the moderation of this thread. So, any derailing will be deleted.

Let the people speak their mind

Feel free to start a Coronavirus conspiracy thread or a medical care system overhaul thread or basically any thread you want on the board.

This thread is for information and polite discussion.

on 5/18/20 at 12:39 pm to TideSaint
Interesting video on how the online drivers license test has gone in Georgia during the lockdown