26
And after 50 years it comes to an end. As I expected, the University, the coaches and the team have chosen to be a part of the lie. So long dawgs

Smart says he is committed to being part of the fight for racial equality in America.

Supporting these thugs who resisted arrest and were felons. The last one raped his wife but the Dawgs are going to march for the lie. 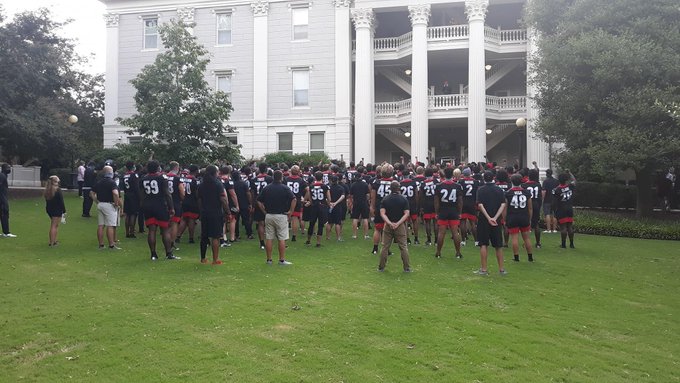 on 9/3/20 at 8:36 am to Walkthedawg
This seems like it could possibly be a bit of an overreaction. Giving up on 50 years of fandom because you a disagree with one statement/action coming out of the program is a pretty bold move.

But to each his own I guess.
Back to top
Reply
Replies (1)
OptionsTop
Replies (1)

on 9/3/20 at 8:49 am to Walkthedawg
Look I don't agree with the narrative either. I think it is way overblown. There are a lot of cops in this country...a lot of them are a-holes...some even racist arse holes. That's true. What's also true is they have an impossible job. They have split seconds to make a decision that could change their life forever...sometimes they make the wrong decision. These guys not complying....even if you think the cops are profiling or just fricking with you, are also to blame too. Don't put yourself in that position... should be obvious.

That being said, if these players want to exercise their right to march and protest for issues they perceive as important, who am I to judge. I just hope they don't cross the line of wanting police reform to saying every white dude is racist and needs to apologize. That's the shite that will be a last straw to me. Don't paint a whole race as problematic based on a few cops.
Back to top
Reply
Replies (1)
OptionsTop
Replies (1)

on 9/3/20 at 8:50 am to Walkthedawg
You have to understand that nobody in that picture probably knows more about all of this than the mainstream narrative. They may truly believe that they’re at risk every day they leave the house of getting shot by a policeman.

Smart also has to do the right thing for the University and UGA. I fully believe he’s being sincere...but even if he didn’t believe any of this he couldn’t say that.

Also, he spoke directly to caring how the players feel and nothing overly political. He may have elsewhere but nothing over the top I’m sure.
Back to top
Reply
Replies (2)
OptionsTop
Replies (2)

quote:
Also, he spoke directly to caring how the players feel and nothing overly political. He may have elsewhere but nothing over the top I’m sure.

He has to, it's all about recruiting

The narrative has been set, BLM because thugs were shot by police while they were resisting arrest. After the fact, we find out how evil these people were but the media never corrects the record. They are marching for a lie and if you support the team, you are supporting the lie.

It's your right to support a lie, I choose not to support BLM, they were founded by communist and are a terrorist organization. They create nothing but destruction every where they go.
Back to top
Reply
Replies (3)
OptionsTop
Replies (3)

on 9/3/20 at 9:11 am to Walkthedawg
I'd be willing to bet that if you gave them all truth serum, 95% of college football coaches don't support BLM. But they have to at least pretend to publicly support it for recruiting.

NFL teams wearing Jacob Blake's name on their helmets are fricking ridiculous though. Imagine being one of his rape victims and having to see that worthless piece of shite being held up as a martyr.
Back to top
Reply
Replies (0)
OptionsTop
Replies (0)

With that said if it’s sports or a concert I don’t want to hear political views regardless of what the views are.
Back to top
Reply
Replies (0)
OptionsTop
Replies (0)

to Everyone
Advertisement
Back to top
DawgNation4

on 9/3/20 at 9:17 am to Walkthedawg
LOL sorry you got triggered there snowflake, don’t let the door hit you in the ass
Back to top
Reply
Replies (1)
OptionsTop
Replies (1)

quote:
yeah you're not racist at all....

Please, provide one example if racism in that post. Please! If you're going to use that word, know what it means.
This post was edited on 9/3 at 9:19 am
Back to top
Reply
Replies (0)
OptionsTop
Replies (0)

And I dont support BLM the organization.

There is (and should be) a lot of nuance to the discussion. Publicly claiming that one is against racism of all forms is a good thing.
Back to top
Reply
Replies (0)
OptionsTop
Replies (0)

quote:
LOL sorry you got triggered there snowflake, don’t let the door hit you in the ass

all I can do is provide the truth, if you choose not to accept it, that's on you.

BLM admits that they are trained MARXIST 1:27 of video
Back to top
Reply
Replies (1)
OptionsTop
Replies (1)

on 9/3/20 at 9:26 am to Walkthedawg
I bet you excuse kids as being impressionable kids when they get caught riding mopeds without a license, drinking underage, driving while intoxicated, etc.

This is no different. And you think the coaches have any choice? If they stand against any of this, they will be crucified and our recruiting and program as a whole will take a major hit. They are playing the long game. This shite will pass eventually and they know this. Until then, they have to publicly toe the line.
Back to top
Reply
Replies (1)
OptionsTop
Replies (1)

quote:
This seems like it could possibly be a bit of an overreaction.


quote:
Following a more than three-hour discussion that emerged during a routine team meeting Thursday, Georgia football’s Twitter account posted a video in which several players and coaches expressed their support for the Black Lives Matter movement and their desire for people to have conversations that lead to change.

It can't be said enought that BLM is a MARXIST orginazation that wants the destruction of America. That's what the team and players are supporting whether you guys want to admit it or not. I understand, you love Georgia Football, but they have crossed a line. Country before football

on 9/3/20 at 9:32 am to Walkthedawg
Why don’t you give an example of Kirby supporting the BLM or antifa organizations with what he said? Acknowledging that there is probably struggles black people go through that we won’t experience isn’t some radical thought, it’s the opinion of the vast majority of black people, including my friends.

I just don’t see how those words correlate to supporting the looting and Marxist group. I feel like most reasonable people can make the distinction, and Kirby views these players as his children I’m sure, and he’s also playing into the political game a little.

All in all the people who have to announce over and over that they in fact won’t be watching sports on Facebook and shite are just as obnoxious.

quote:
This shite will pass eventually and they know this.

So they are supporting a lie, thanks for confirming that