As foretold in the ancient scrolls of Aggie lore, in the world of Texas A&M sports, there must be balance. Prepare to have your football sadness offset by a journey to shooty hoops success, a trip… 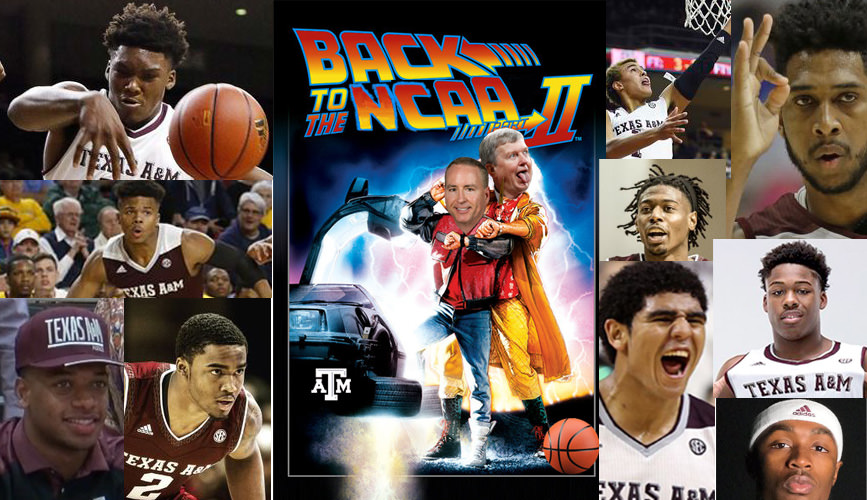 Billy Kennedy's 6th season with the Texas A&M basketball team can be summarized as a year to hit the pause button. Coming off the best year in Texas A&M basketball history (SEC Championship, Sweet Sixteen), the Ags were in for a pullback as four starters departed the team (three to the NBA) after the 2015-2016 season. Danuel House, Alex Caruso, Jalen Jones, and Anthony Collins forever cemented themselves as an integral part of A&M basketball lore, passing the torch on to a talented Sophomore class.

Although only one starter remained, the significant contributions of the '15-'16 Aggie bench lent some hope to the season. The returning starter and pre-season all-SEC team member Tyler Davis, along with fellow Sophomores Admon Gilder and D.J. Hogg, led the charge into the 2016-2017 season. Joining them were J.C. Hampton (PG), a graduate transfer from Lipscomb whom was expected to step into Collins' shoes, as well as a respectable incoming 2016 recruiting class....or was it?

The 2016 recruiting class, while not as highly rated as the 2015 class, still looked able to refill the team's ranks. The class was headlined by high 4-star talents Robert Williams (PF) and JJ Caldwell (PG) with mid 4-star Deshawn Corprew (SF) and 3-star Eric Vila (PF) also joining the squad. Then came crushing news. Both Caldwell, who was expected by many to be a starter, and Corprew, were both declared ineligible. Caldwell would sit out to wait his turn while Corprew would move on from College Station.

Despite the early personnel setbacks, the Ags still looked like a borderline tournament team early in the season. The Ags entered conference play at 8-3, with all losses coming to eventual NCAA tournament teams (USC, UCLA, and Arizona) by an average margin of 4 points. Headlining the early buzz was Freshman Robert Williams (11.9 PPG, 8.2 RPG, 2.5 BPG), who looked even better than billed, blocking shots into the stands and rising above defenders with ease. Unfortunately, no other newcomers could step up to the plate.

It was woefully apparent by the time conference play started that the Aggie squad was shorthanded. Only seven players were making regular contributions. The second conference game, against Kentucky no less, saw a walk-on start at SG. To make matters worse, D.J. Hogg, starter and clutch 3-point shooter, was obviously off his game. After a struggle to stay on the court, Hogg's season came to an official end due to a severe foot injury, leaving the Aggie's roster extremely depleted. The depth of the Ags (or lack thereof) was highlighted by the broadcast team in every game thereafter. Iron man Admon Gilder logged an average of 39 minutes (out of a potential 40 minutes) per game through the final 15 games of the season, playing a complete 40 minutes in 10 of them. It was quickly apparent that the coaching staff had more faith in their exhausted starters than the Aggie bench players.

Even with only six players contributing for most of SEC play, the Ags finished just shy of .500 in conference play, with the large majority of losses coming in close games. While disappointing, the team was clearly still on the cusp of greatness. Was this truly a pause, or the return to the status quo?
This post was edited on 3/26 at 9:23 pm
Back to top
Reply
Replies (11)
OptionsTop
Replies (11)

The 2017 off-season went much better than the year before, in all aspects. It all began with a surprise announcement that Robert Williams would be returning. Williams was projected to be a top 10 pick in the 2017 NBA draft however, he chose to stay and refine his low post abilities another year. Leaving the team were one starter (Hampton - 6.7 PPG, 1.8 APG) and defensive specialist Tavario Miller (3.1 PPG, 2.7 RPG) to graduation, along with a handful of transferring non-contributors (notably, Vila - 2.3 PPG and Soph. Kobie Eubanks - 0.9 PPG).

Not only was the blow of departures much softened, the arriving cavalry is exemplary. In summary, we go from having zero point guards in 2016-2017 to having THREE in 2017-2018 as well as add some much needed depth at SG and SF.

Meet the newest members of the team (pictures courtesy of Texas A&M Basketball):

JJ Caldwell (PG - 6-1, 195, .9758 rating) – Cypress, TX – Cy Woods
JJ was a member of the team last year, but was ruled ineligible due to issues with his being home schooled in his Senior year of high school. He’s a wizard with the basketball and is expected to be the team’s starting PG. 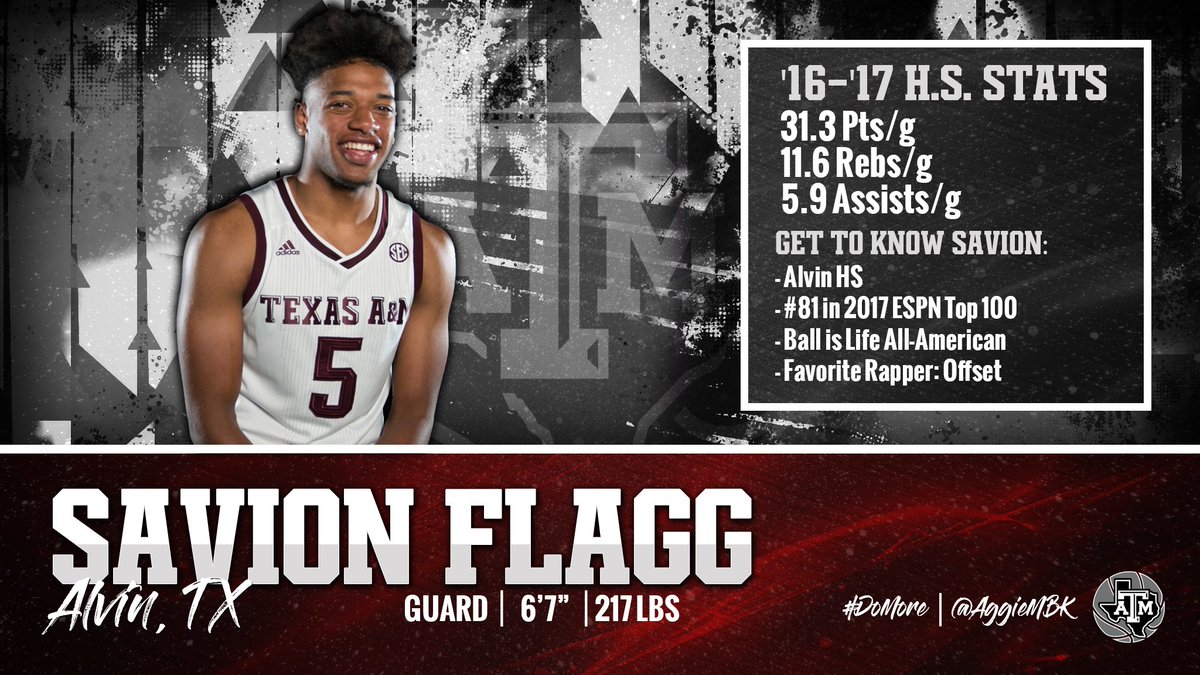 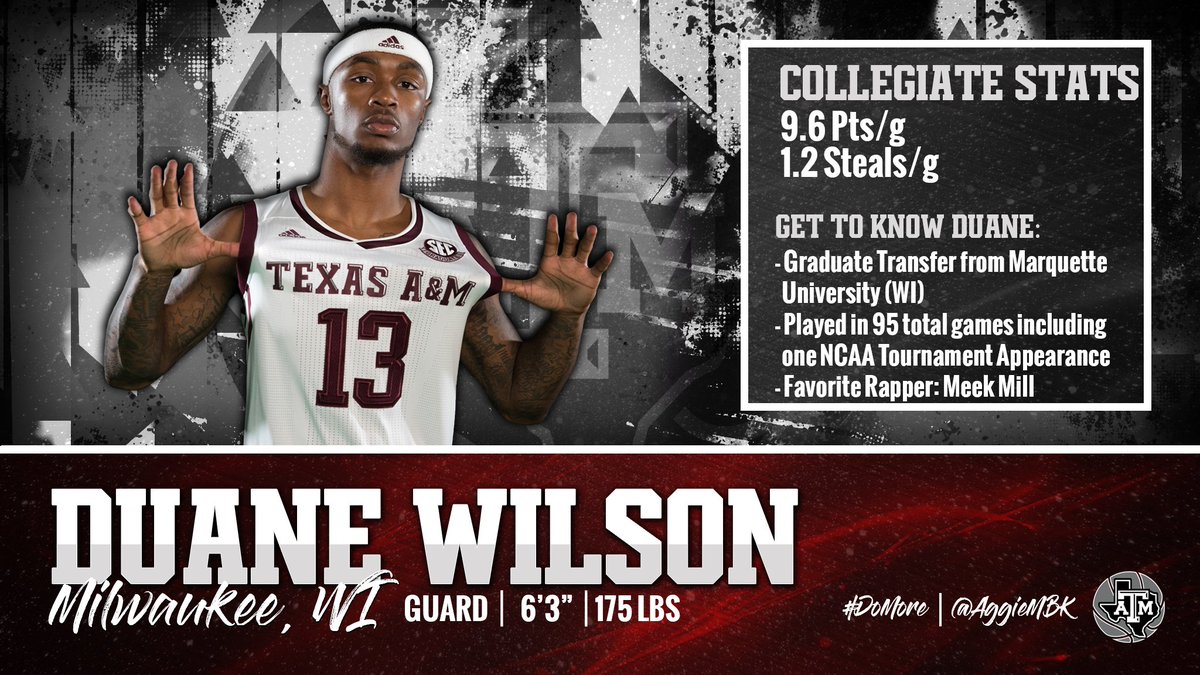 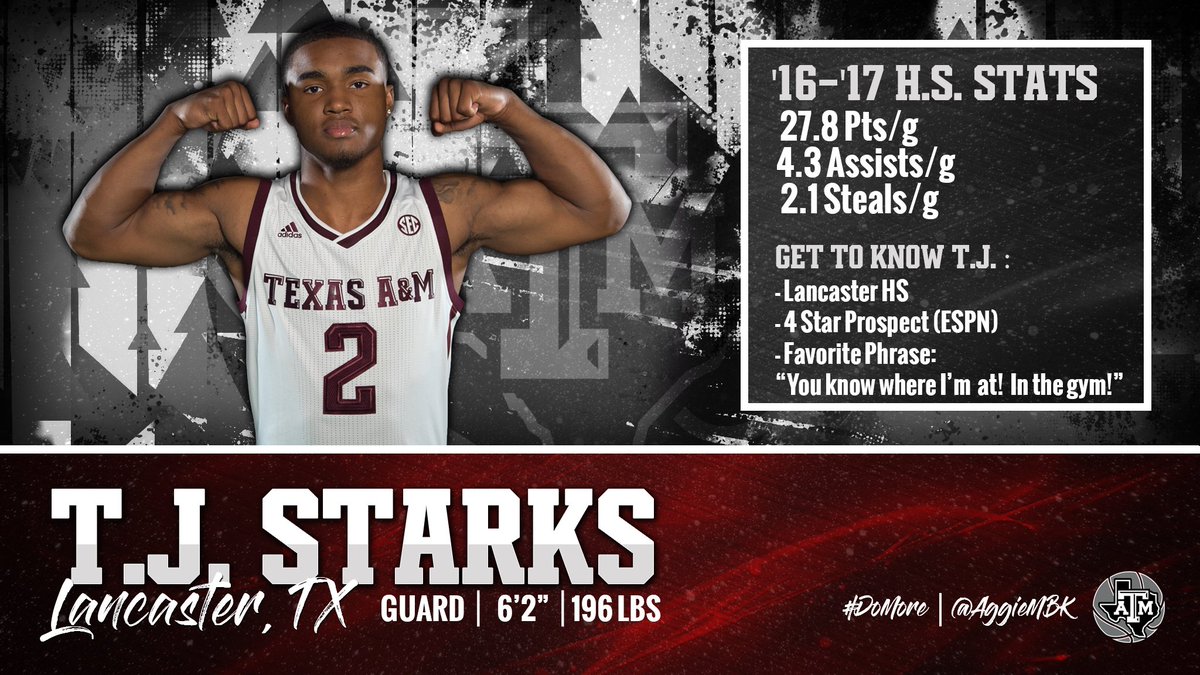 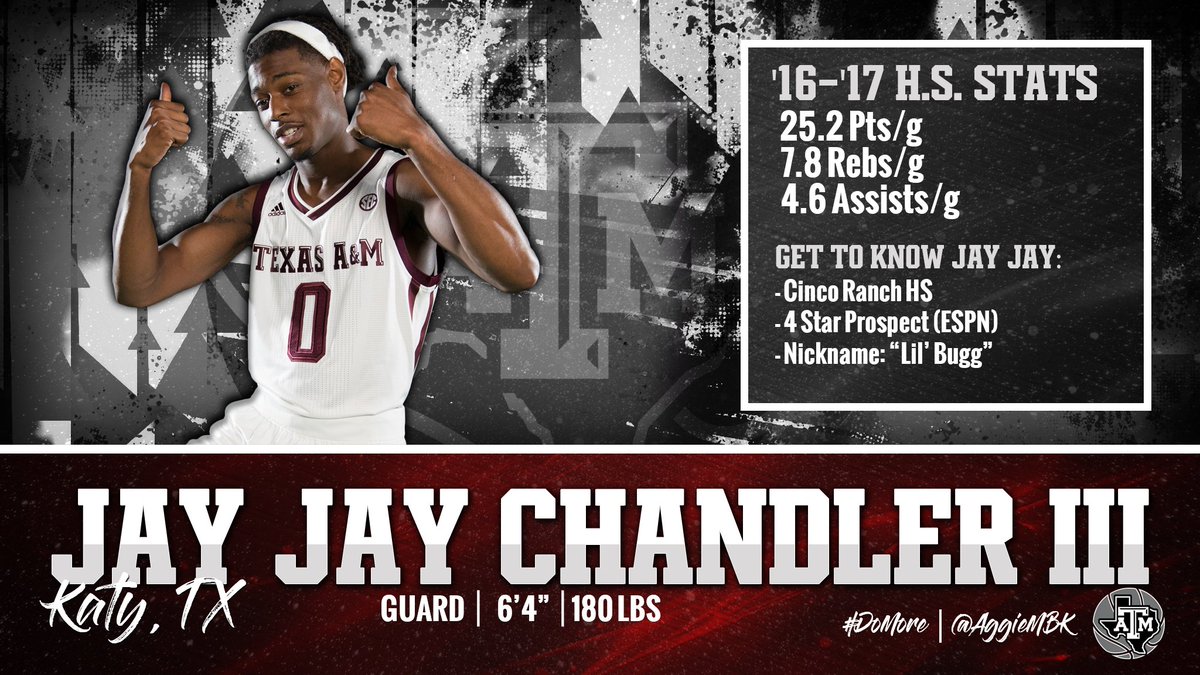 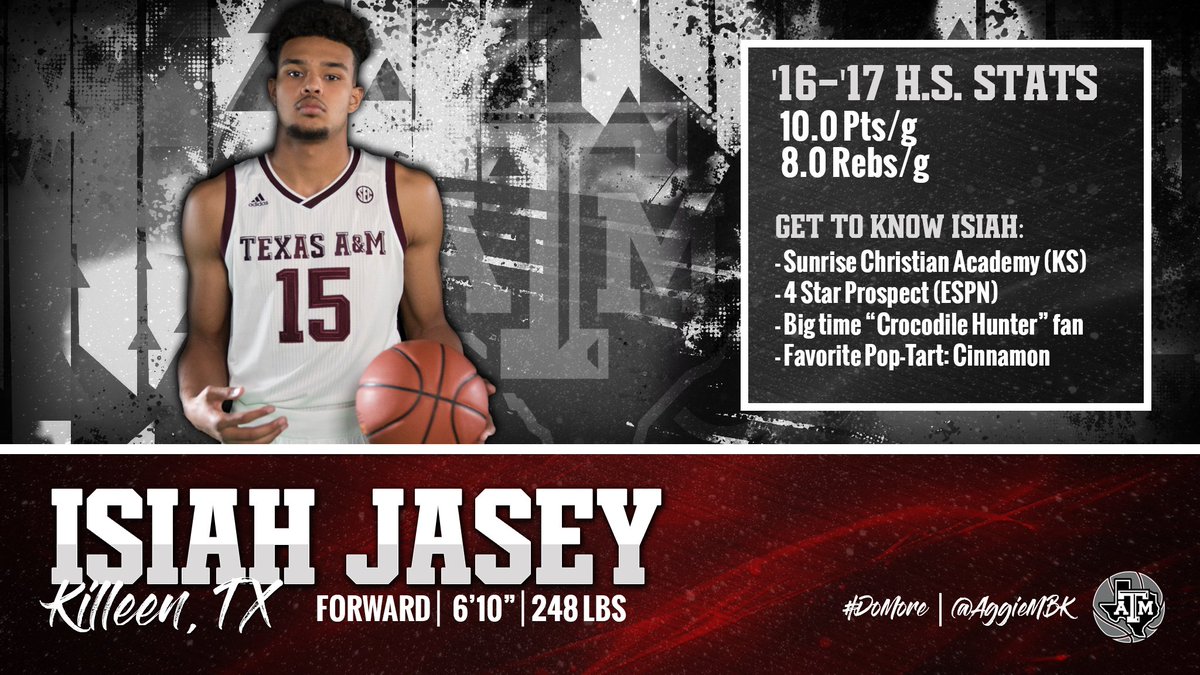 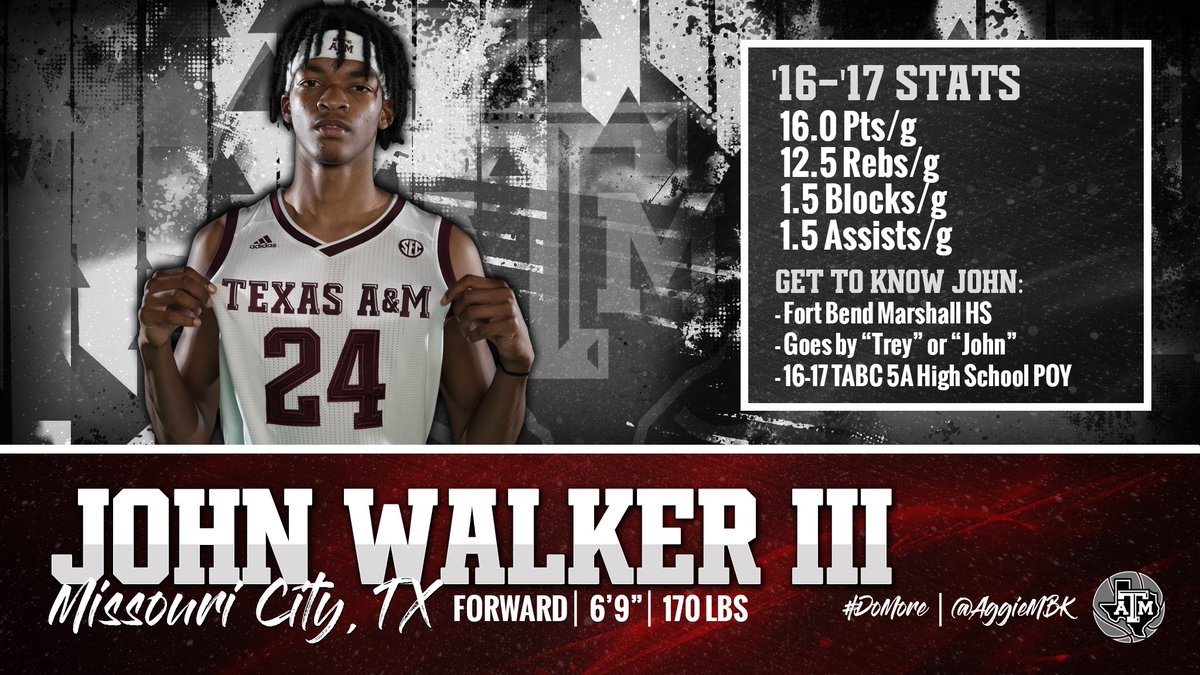 One late breaking black eye on the off-season are the announcements that Caldwell will be suspended for five games and Williams for three due to violation of university policies. This will make the opening match up versus the infamous “Press Virginia” that much more difficult.
This post was edited on 11/5 at 3:02 pm
Back to top
Reply
Replies (0)
OptionsTop
Replies (0)

This year’s Aggie squad was picked to finish third at SEC media days. Pre-season media day accolades were awarded to Robert Williams (Player of the Year, 1st Team All-SEC) and Tyler Davis (2nd Team All-SEC, 14.1 PPG, 7.0 RPG). In addition to these two stars, return the trio of Gilder (13.7 PPG, 3.9 APG), Hogg (12.0 PPG, 5.1 RPG), and Tonny Trocha-Morelos (8.1 PPG, 5.2 RPG), who were all significant contributors to the 2015-2016 team that won the conference and made the Sweet Sixteen. Besides Hogg’s injury, their game hadn’t missed a beat. It all came down to DEPTH last year, which has been addressed in the off-season.

The biggest thing working against the Aggies this year is a brutal schedule. The Ags will play seven regular season games against the pre-season top 11 (Arizona #3, Kansas #4, Kentucky #5 twice, Florida #8, USC #10, West Virginia #11), with only two of those games at home. Just winning one of those early top 10 match ups would show huge progress from the year prior.

I’ll ask the same questions I did before the 2015-2016 season- Can we stay healthy? Will we get significant contributions from the freshman class? If the answer to those two questions is yes, then this is an incredibly dangerous team. The talent is there, the coaching is there, the pieces have all come together again.

This strong Texas A&M team challenges both Kentucky and Florida for the SEC championship down the stretch. A rough early schedule produces two pre-conference losses (West Virginia and one of USC or Arizona), followed by another at Kansas. Conference play sees us lose at home vs Florida, split with Kentucky, and then lose on the road to Alabama and Vanderbilt.

This is an incredibly talented team that has the ability to make a deep NCAA tournament run. Caldwell, Starks, and Wilson will all contribute at PG while Flagg has the skillset to be an all-conference player at some point during his career. Williams and Davis will live up to their all-SEC billing while Gilder will continue to prove that he's been slighted by the media. Our depth issues should be solved this year, so if the team stays healthy, we’re looking at a team that’s going to challenge the 2015-2016 squad’s title as best season in Texas A&M basketball history.

On a final note, our basketball team doesn’t get enough credit or love. There’s a lot of videos posted by Texas A&M Athletics that show just how hard this team works. Every member of the coaching staff and team represents the University and its values well.

on 11/5/17 at 3:41 pm to Projectpat
Sticky requested for the "official " basketball thread
Back to top
Reply
Replies (2)
OptionsTop
Replies (2)

You're a damn mod.

on 11/7/17 at 11:25 am to Projectpat
Just sent an email to some Aggie Coworkers about a happy hour on Friday. Ready for this!

to Everyone
Advertisement
Back to top
WestCoastAg