USA TODAY asked more than 100 of the nation's top public universities for data showing how they handled sexual misconduct complaints under the landmark federal law known as Title IX.

Six of those schools refused to provide it.

They shared no information about the number of sexual misconduct complaints they investigated, how many students they found responsible or what types of sanctions they issued to those students.

They opted to leave the public in the dark about their track record of complying with a key mandate under Title IX, which turned 50 years old this summer. The law is supposed to ensure students' right to an education free from sexual harassment and gendered violence. It put the onus on colleges to build robust systems for investigating allegations, protecting complainants and disciplining perpetrators.

While some schools provided the information willingly within days or weeks, others took months or more than a year. When schools declined to provide the data voluntarily, USA TODAY filed public records requests, which compelled most holdout schools to disclose data that was at least partially responsive.

Here's how each of the six universities that refused to provide any data responded to USA TODAY's requests:

The news organization filed a public records request for the information in June 2021. Auburn's records office denied the request, saying it was not "able to locate any existing responsive records." That office did not respond to a subsequent request in September 2021 seeking annual reports containing the information. It denied a third records request this October for only the sanction information, saying it could release it at its "discretion" but chose not to.

The news organization filed a public records request for the information in June 2021. Georgia's open records office declined the request that July, saying it was not required to create records that do not exist. USA TODAY filed another request later that month for only the sanction information over a partial time period, 2016 to present. The office said gathering and reviewing the records would take more than 200 hours of staff time and it would charge $7,590 to complete the task.

on 11/29/22 at 5:45 pm to Night Vision
I honestly don't see what the issue is. Why the frick does it matter if a school gave some journalist information or not?

Title is misleading, it's not like they were refusing to cooperate with an investigation or something.
Back to top
Reply
Replies (2)
OptionsTop
Replies (2)

It's the newspaper equivalent of Reading Rainbow.
Back to top
Reply
Replies (0)
OptionsTop
Replies (0)

quote:
I honestly don't see what the issue is. Why the frick does it matter if a school gave some journalist information or not? Title is misleading, it's not like they were refusing to cooperate with an investigation or something.

re: 6 universities kept Title IX sexual misconduct data secret?Posted by Referee on 11/29/22 at 5:59 pm to Night Vision
This is not really a good idea for the university. They are only going to suspect there is something to hide and stir up even more trouble. If the Bham news or Montgomery Adv. sees this and suspects something is there, this is simply going to spur them on. It would be better to have released everything and be open to begin with. Assuming there is nothing there.

If there is something, stonewalling is a bad idea also.
This post was edited on 11/29 at 6:01 pm
Back to top
Reply
Replies (2)
OptionsTop
Replies (2)

quote:
will be impossible to dodge FOIA with Freeze there. better keep it clean

to Everyone
Advertisement
Back to top
allin2010

Ultimately, 56 schools provided information that allowed USA TODAY to do a first-of-its-kind analysis on Title IX case outcomes, while dozens of others schools provided data covering a partial timeframe

But they pointed out the 6.
Back to top
Reply
Replies (2)
OptionsTop
Replies (2) 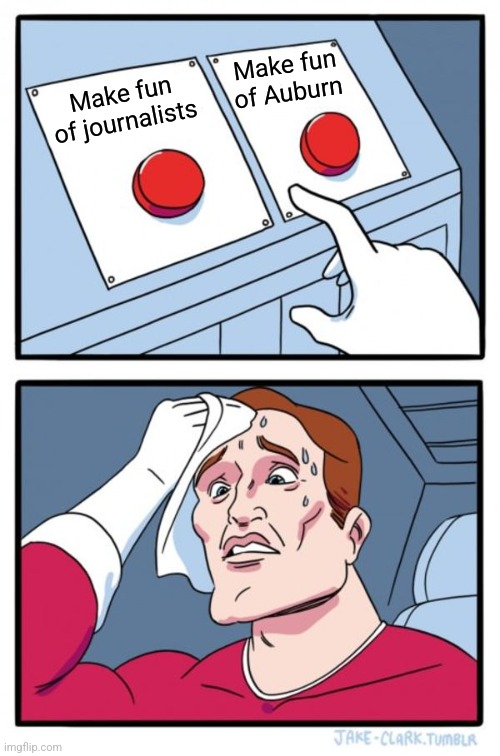 on 11/29/22 at 6:34 pm to Night Vision
It was a request from newspaper, not a govt agency. UGA said they could have it if they paid for the time it took. USA Today must not have wanted that bad.
Back to top
Reply
Replies (0)
OptionsTop
Replies (0)

quote:
But they pointed out the 6.


Of course they did.. the states of Alabama, Florida , Georgia, Indiana, Tennessee, and Nevada.. wonder what’s special about those states?
Back to top
Reply
Replies (0)
OptionsTop
Replies (0)

I’d say Tiger High, but who’d know which is which?
Back to top
Reply
Replies (0)
OptionsTop
Replies (0)


Witch hunt somewhere else. Woke media killed Title IX and could give a shite about actual (real) women.
Back to top
Reply
Replies (0)
OptionsTop
Replies (0)

on 11/29/22 at 6:55 pm to Night Vision
I'd like to know why USA Today is pro-Biden and pro-Harris when one raped his intern and the other allowed children to be raped by catholic priests as a DA..
Back to top
Reply
Replies (1)
OptionsTop
Replies (1)

on 11/29/22 at 9:12 pm to Night Vision
I really have no words for the entitlement of whiny journalists with hit job motives. Low life puppets with little to a lot of respect for themselves and none for others who share an opinion or practice differing from their own. Telling that dude to kick rocks is the appropriate response, if not a lot more.
Back to top
Reply
Replies (1)
OptionsTop
Replies (1)