re: Herd immunity is gaining fast traction, peaking now...Posted by DavidA on 7/13/20 at 10:11 am to 3down10
130,000+ deaths in the US. New records for infections set every day in some states. And some people won’t wear a mask because of political reasons, or don’t believe evidence that they help, or "muh freedom", or other cockamamie excuse.

Such intelligence. We really need to improve our educational system.
Back to top
Reply
Replies (2)
OptionsTop
Replies (2)

True or not, if you have a bunch of 28 year old nurses and 35 year old doctors going to games, then getting it... are you going to say it was worth it when you get a letter saying your grandmother is dead?

The remedy here is that you have certain criteria of people to allow in your games. You're already limiting the amount of people.

Doctors and nurses probably shouldn't be going to the games.

And when it comes to masks, you shouldn't be compelled to wear masks by the government. But you should wear a mask indoors and around people.

If you're outside with no people around, you don't need a mask. A/C circulation can spread it through the air.

re: Herd immunity is gaining fast traction, peaking now...Posted by DavidA on 7/13/20 at 10:21 am to DavidA
FYI: Sunday’s Houston Chronicle’s obituary section was 43 pages long. Yep, herd immunity is setting in.
This post was edited on 7/13 at 10:22 am
Back to top
Reply
Replies (0)
OptionsTop
Replies (0)

quote:
by late July note a rapid drop in cases. Kickoff will happen in SEC no later than Oct. 3rd. By mid season full stadium attendance will be allowed. IMHO.

on 7/14/20 at 9:33 am to transcend
Have you not red this board? Rednecks always know more than scientists.

And universities are only good for fielding football teams. Amirite?
Back to top
Reply
Replies (1)
OptionsTop
Replies (1)

quote:
Have you not red this board? Rednecks always know more than scientists.

And universities are only good for fielding football teams. Amirite?

You forgot certain political leaders will exert a holy force to protect their followers.

What scares me the most about the Coronavirus, other than catching it, is that it could be like the Herpes virus. Meaning once you have it, you always have it.

It could lay dormant for God only knows how long and then one day make a triumphant return. Only Herpes will probably just give you a cold sore on your lip. This could come back two years from now and kill you deader than disco.
Back to top
Reply
Replies (1)
OptionsTop
Replies (1)

quote:
We really need to improve our educational system.

You do understand that the people that run public education in this country are also the same people who created the welfare state and other entitlement programs to keep people oppressed, right?
Back to top
Reply
Replies (1)
OptionsTop
Replies (1)

quote:
You do understand that the people that run public education in this country are also the same people who created the welfare state and other entitlement programs to keep people oppressed, right?

You do understand that the people that run public education are local school boards that are overwhelmingly controlled by Republicans who don't believe in evolution?

I get your dismay... but considering that Republicans have mostly controlled the government for all but a handful of years the last 20 years (even when we had a Democrat President we mostly had a Republican Senate and House) blaming this on one party is... lacking.

Also anyone who believes that there is this secret conspiracy to subvert education to leftist beliefs has never, never, been part of the education system. I have seen Professors with Doctorates spend an entire meeting arguing over what type of coffee gets served at the next meeting.
Back to top
Reply
Replies (2)
OptionsTop
Replies (2)

on 7/15/20 at 2:50 pm to Arksulli
Mississippi governor, Tate Reeves, tweeted about herd immunity two days ago. Thought it was interesting to see this coming from a pretty staunch, Trump supporting, conservative governor.

1) "Let's talk about herd immunity. I've listened to some people argue that the rapid spread of cases is a good thing, and we need to reach herd immunity in Mississippi and elsewhere to survive. I'm not a health care expert by any means, but I am a math guy. And I have thoughts:"

3) "In Mississippi, our population is 3 million. We've had 36,680 cases so far. We'd need 1.2 MILLION infections to achieve that hypothetical 40% threshold. (Remember, experts say it's double that.)"

4) "Over the last two weeks, our hospital system has started to become stressed to the point of pain. We are seeing the early signs and effects of it becoming overwhelmed. We had to suspend elective surgeries again."

6) "I'm not one of these guys that immediately dismisses any idea that challenges the expert status quo talking points. I'm pretty skeptical by nature. That's healthy. But herd immunity is not anything like a realistic solution in the short or mid-term. I wish it was."

7) "Unless you're willing to go without hospitals after a car wreck or heart attack, we need a different approach. Right now, despite mixed messages at the beginning, it seems like masks are the best bet. They're a hell of a lot better than widespread shut downs. Please wear one!"
Back to top
Reply
Replies (2)
OptionsTop
Replies (2)

Herd immunity is a pipe dream for people who don't understand the human cost it takes to get there or how long it would take.

Wear a mask. Maintain social distancing. Wait for science to give us a vaccine, which they seem to be doing pretty well on.
Back to top
Reply
Replies (0)
OptionsTop
Replies (0)

on 7/15/20 at 10:17 pm to kage
Both NY and Sweden are at practically 0 deaths. Why? If you say lockdown or masks, you are wrong. Most likely, the disease has burned out without needing to achieve herd immunity. 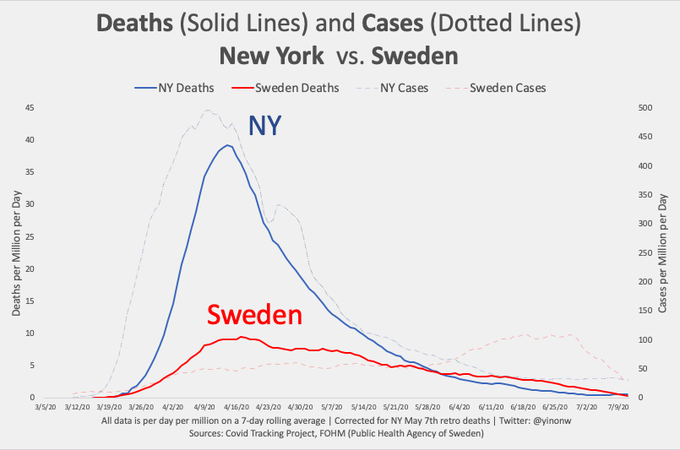 quote:
Both NY and Sweden are at practically 0 deaths. Why? If you say lockdown or masks, you are wrong. Most likely, the disease has burned out without needing to achieve herd immunity.

Yes, it has been a Swedish miracle. Where they used to be dead last in number of deaths per million there are now 3 European countries doing worse than them. Two Balkan countries and the UK. Everyone else in Europe is doing better than Sweden.

It is something be proud of when you know you are handling a pandemic better than Montenegro.
Back to top
Reply
Replies (1)
OptionsTop
Replies (1)

But keep fricking that chicken.

But yes, continue to talk about how wonderful this has been for Sweden. I applaud your ability to exist in your own world with your own data. You are an inspiration for us all.

Truly you have convinced me. White is now black. Wrong is now right. Peace is war. You've sold me on your point of view sir.
Back to top
Reply
Replies (1)
OptionsTop
Replies (1)

Europe and US States, sorted by deaths per million: 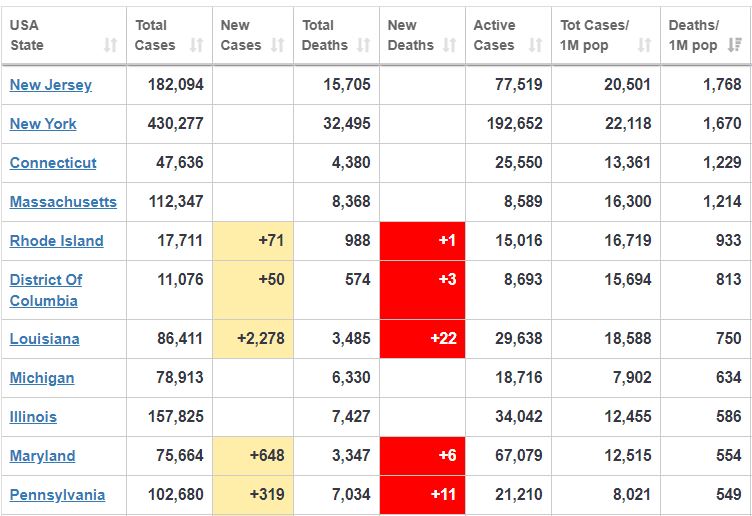 Its time to fess up. Sweden achieved the same or better results (much better in some cases) than much of Europe and many US states. Even though there was no lockdown or mask mandate.

Continue fricking your chicken though.
Back to top
Reply
Replies (1)
OptionsTop
Replies (1)

quote:
Continue fricking your chicken though.

You seem to have a... focus... on copulating with poultry.

But lets do this shall we?

By the numbers you displayed Sweden has one of the worst deaths per million ratios in the world. And unlike Belgium, Spain, and Italy they are still in the bottom 4 of countries in Europe. They also had a head start on preparing for this, but we will ignore that.

So. They have a death rate vastly higher than any other Scandinavian country. Their economy has contracted about the same as everyone around them, but with the heaping helping of a lot more deaths.

Yes. Truly they are humping the poultry as you seem so fond of doing. Who would not want to have one of the highest death rates in the world from this while still suffering the same economic damage?

Truly Sweden has fricked that chicken. You have convinced me. No, no, I realize you want to demonstrate in graphic form how much you love chickens, but I ask you, this once, to use some common decency.
Back to top
Reply
Replies (0)
OptionsTop
Replies (0)

quote:
I have seen Professors with Doctorates spend an entire meeting arguing over what type of coffee gets served at the next meeting.

People make questionable coffee decisions. Unless you're in charge of whoever is in charge of organizing refreshments, how can you assume they're going to have the right kind?

What if the next meeting is at on the road, at a site with which you're not familiar? Unless you verify, ahead of time, that coffee is being supplied by someone who actually drinks coffee, you're putting yourself in fate's hands.

There might not even be coffee. frick all that. We're going to get it right before the next meeting.
Back to top
Reply
Replies (0)
OptionsTop
Replies (0)

quote:
COVID is no big deal if you're under 80. More dangerous driving to work. ?


Learn something instead of making stupid comments, better yet ask The Atl Braves' Freddie Freeman about CV19

quote:
Learn something instead of making stupid comments, better yet ask The Atl Braves' Freddie Freeman about CV19

COVID is no big deal if you're not fat and / or old, I'm not reading your lame link.
Back to top
Reply
Replies (0)
OptionsTop
Replies (0)