52
I have purposely refrained from posting this for a few days to allow emotions to cool and to try to consider this from a purely objective perspective....let me start by saying that I believe the rule to be too harsh and that modifications should be based on flagrant and incidental distinctions. This is an NCAA rule... not an SEC rule. The SEC has been told it must be enforced to prevent concussion related litigation.

No player shall target and make forcible contact to the head or neck area of a defenseless opponent (See Note 2 below) with the helmet, forearm, hand, fist, elbow or shoulder. This foul requires that there be at least one indicator of targeting (See Note 1 below). When in question, it is a foul (Rules 2-27-14 and 9-6). (A.R. 9-1-4-I-VI)

A player in the act of or just after throwing a pass.


Here is the link to the video: White clearly "launches"


Don't agree with the rule.... but the official did his job and made the correct call as the rules now stand
Back to top
Reply
Replies (27)
OptionsTop
Replies (27) 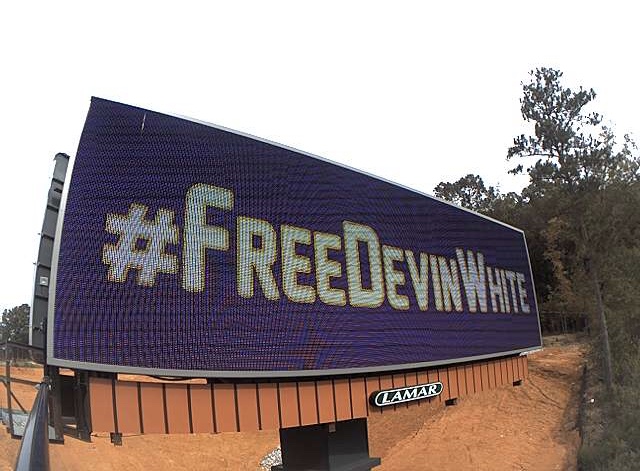 He didn't leave his feet, you retard.

Objectively, you can suck that tiger dick.
Back to top
Reply
Replies (0)
OptionsTop
Replies (0)

quote:
He didn't leave his feet,

That's not the hill you want to die on.
Back to top
Reply
Replies (0)
OptionsTop
Replies (0)

That is more targeting than White's hit. Heck, White still has a foot on the ground when he's making contact, doesn't really seem like much "launching" to me, and certainly not at the head/neck are when he hits in the chest area first with his hand.
Back to top
Reply
Replies (0)
OptionsTop
Replies (0)

quote:
He didn't leave his feet, you retard

The chest is not the neck.
Back to top
Reply
Replies (0)
OptionsTop
Replies (0)


Dean Waite, a former SEC official who graduated from the University of Georgia with an undergraduate and law degrees, who now practices law in Mobile, Alabama, has explained his opinion. Waite officiated SEC games from 2007-10.

Waite recently told AL.com that he would have handled the review process differently about White being ejected for targeting Mississippi State QB Nick Fitzgerald.

“I’m OK with the call on the field live,” Waite said of the White penalty. “It looked enough like it that I’m OK with it being called. I think when they looked at it, however, they should’ve taken the call away.”

In Waite’s opinion, there wasn’t enough there to constitute an ejection.

“In order to call a foul, you have to have to one element or indicator of targeting,” he said. “Some of those indicators are a launch, lowering the head before making contact. What I saw, on replay, was a guy going in. He did lead with his forearms, but what he did was he hit the guy in the chest with his forearm. I didn’t see any effort to hit in the neck or head area. Now, their helmets did wind up making contact a little bit, but that was a result of the shove.”

Though it appeared to Waite that White launched himself.

“It does look like his feet came off the ground,” Waite admitted. “But again, I didn’t see any effort to go to the neck or head area. It just isn’t leaving your feet. You have to be launching to attack your opponent in the head or neck area.”

quote:
look at it again

Running with your upper body and hands forward isn't launching. The definition of launching is leaving your feet. Dude never hit the ground.
Back to top
Reply
Replies (0)
OptionsTop
Replies (0)

quote:
It just isn’t leaving your feet. You have to be launching to attack your opponent in the head or neck area.”


quote:
You have to be launching to attack your opponent in the head or neck area.”

quote:
"Launch—a player leaving his feet to attack an opponent by an upward and forward thrust of the body to make forcible contact in the head or neck area"

Where in that video did you see upward and forward? I'm not saying it was, or wasn't targeting, but can you really say he "clearly" launched when his next foot came down in step?
Back to top
Reply
Replies (0)
OptionsTop
Replies (0)

quote:
quote: He didn't leave his feet, you retard look at it again

His feet were squarely on the ground when he made contact, and he remained upright after the tackle. Do you expect him to moonwalk to the quarterback?
Back to top
Reply
Replies (0)
OptionsTop
Replies (0)

on 10/23/18 at 3:41 pm to mattloc
If you want to, you can make almost any tackle fit into that definition. Any tackle in which the defenders feet are not on the ground could be called targeting if it is looked at with your mindset.

Don’t overthink it. Watch the replay. White shoved him in the chest just after the ball was released. It doesn’t even reach roughing the passer, let alone targeting.
Back to top
Reply
Replies (0)
OptionsTop
Replies (0)

on 10/23/18 at 3:42 pm to mattloc
He could have hurt that QB bad, kind of like your guy did to Tenn QB.
in this case he held way back did not launch or lead with his head and pushed the QB down.

even your own lord/coach is on the record of bama's cheating ways. Add this one to the long list.