Muh lost 69 players to the NFL.

Muh Birmingham too close to Tuscaloosa.

Muh Bama over signs on NSD.


You guys are pathetic.
Back to top
Reply
Replies (1)
OptionsTop
Replies (1)

on 2/22/21 at 6:38 am to BamaIsGoat
Let me go to LSU affiliated board to validate my title
Losers!
And not one true road game was played
Back to top
Reply
Replies (0)
OptionsTop
Replies (0)

1.) UT which was a better team than frankly anyone in the SEC you played this season minus MAYBE UF
2.) An Auburn team that beat the same Bama team last year
3.) Y’all...again, frankly the same team as last seasons

I don't have a dog in this fight but oof, put the keyboard down buddy.
Back to top
Reply
Replies (0)
OptionsTop
Replies (0)

on 2/22/21 at 7:19 am to TideSaint
And yet only, one of these seasons will be remembered by CFB fans as the pandemic season and will be considered a massive outlier compared to 100 years of college football. This fact bothers a certain fanbase so bad that they make up random parameters to compare their team to others.

My fave is when this board moans and cries about all the 2019 LSU talk/GOAT team debates, but we get these gems of threads constantly from Alabama folks
Back to top
Reply
Replies (0)
OptionsTop
Replies (0)

quote:
You realize the second best team in the West was a team lead by Kellen Mond. The same team that had a scare versus VANDY. That is how depleted the SEC was this past season.


It’s so adorable that they talk about the 2020 SEC as if were the toughest gauntlet.

quote:
LSU fans use excuses as arguments more than any fanbase in the country..

A Bama loss can bring some crazy excuses and crying out of the woodwork.

quote:
It’s so adorable that they talk about the 2020 SEC as if were the toughest gauntlet.

Made roadkill out of LSU quick enough.
Back to top
Reply
Replies (2)
OptionsTop
Replies (2)

quote:
Made roadkill out of LSU quick enough.

Because LSU was garbage last year

That isn't some big accomplishment.
Back to top
Reply
Replies (2)
OptionsTop
Replies (2)

quote:
Imagine what the stats would look like if Alabama played Northwestern State, Utah State and Georgia Southern.

You can literally apply this logic the other way, tard.

Imagine if the 2019 LSU team could play the 2020 version of the SEC. Despite the playing of the 3 weak opponents Bama loves bringing up (Georgia Southern, NW State, Utah State), LSU still faced tougher defenses at the end of the day.

Are you trying to say 2019 LSU’s stats would be worse facing an easier schedule?
Back to top
Reply
Replies (0)
OptionsTop
Replies (0)

to Everyone
Advertisement
Back to top
Chimlim

quote:
Made roadkill out of LSU quick enough.

What exactly does that have to do with the fact that the 2nd best team in the SEC this past year was either a Mond-led A&M team who could barely squeak by one of the worst ACC teams or a Florida team who actually lost to shitass 5-5 LSU?

quote:
A Bama loss can bring some crazy excuses and crying out of the woodwork


This is the same fanbase that completely banned another fanbase from posting on their message boards for nearly a decade because of a regular season loss.

That isn't some big accomplishment.

Nowhere to hide. No Northwestern State, Georgia Southern, Utah State on the cheatsheet.
Back to top
Reply
Replies (2)
OptionsTop
Replies (2)


Too bad LSU wasn't good in a year where the rest of the SEC was hot garbage I guess.
Back to top
Reply
Replies (1)
OptionsTop
Replies (1)

You big brains love using the fact that the 2019 LSU team played in a normal season with the usual shit-tier OOC opponents scheduled in your arguments and have no clue how dumb it makes you look. As if LSU had a choice between a full schedule with OOC opponents or an all-SEC schedule (which only happened bc of a global pandemic)
Back to top
Reply
Replies (1)
OptionsTop
Replies (1)

Too bad LSU wasn't good in a year where the rest of the SEC was hot garbage I guess.

10 SEC games were more than enough to melt your DC. It had your best players screaming No Mas at the back end of the schedule. You guys are still whining.
Back to top
Reply
Replies (1)
OptionsTop
Replies (1) 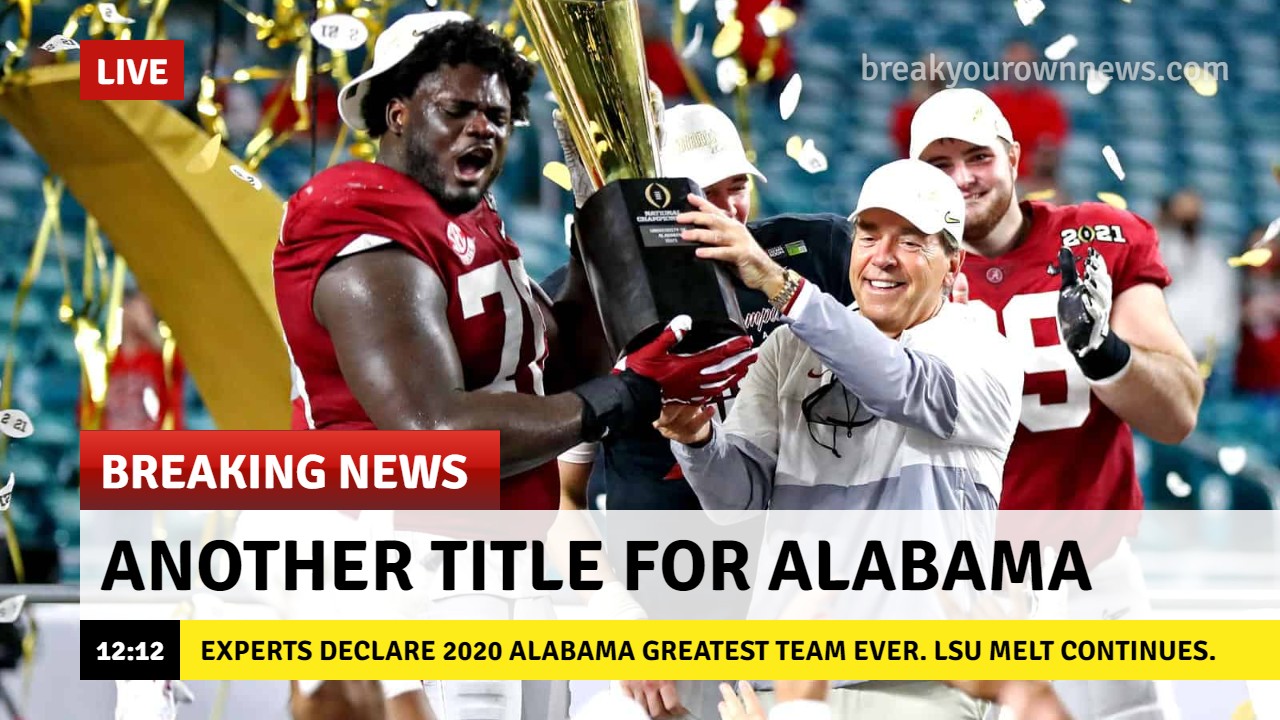 quote:
10 SEC games were more than enough to melt your DC. It had your best players screaming No Mas at the back end of the schedule.

quote:
You guys are still whining.

I'm sorry the truth hurts your feelings. Lets take a look at this "gauntlet" you played.

Missouri: Had a first year head coach with no offseason.

probably still your best win of the year.

Georgia: Had multiple starters out, had to start a 3rd or 4th string quarterback who was a 2 star recruit

Tennessee: Bad team who ended up firing their head coach

Kentucky: An okay team as far as Kentucky goes, was missing a shite ton of players due to COvID

Auburn: Another team that was bad enough to fire its head coach

LSU: Worst LSU team in two decades, returned some of the least production in the country, ended up firing most of its staff

Florida: Was good early in the year but fell apart toward the end. Finished with a three game losing streak with a loss to garbage arse LSU at home, a one possession loss to Alabama, and an arse kicking by Oklahoma