quote:
Alabama is targeting former Texas cornerbacks coach Jay Valai job and the current expectation is that he will be hired, sources told AL.com. Valai would be the replacement for Karl Scott, who left the Tide to become the Minnesota Vikings’ new defensive backs coach.

Valai, a former All-Big Ten defensive back at Wisconsin, had been recently hired as the Philadelphia Eagles assistant defensive backs coach after spending last season at Texas and after a brief run as the cornerbacks coach at Houston.

on 2/12/21 at 5:28 pm to TidalSurge1
What’s the consensus on him? Good coach? Strong recruiter? Good Texas ties? He wasn’t on the coaching list put together, but it did say it was an initial list and there could be other candidates.
Back to top
Reply
Replies (1)
OptionsTop
Replies (1)

quote:
this will be Valai’s third stop since late January, as he was hired at Houston as the cornerbacks coach before leaving for an assistant defensive backs coach role with the Philadelphia Eagles.

quote:
What’s the consensus on him? Good coach? Strong recruiter? Good Texas ties? He wasn’t on the coaching list put together, but it did say it was an initial list and there could be other candidates.

• It only took one call on Valai and the rest was a recurring theme of great recruiter, personable and high-energy guy. Didn't take a lot of prodding with Valai as everyone seems to like him. Was also told this wasn't an easy decision (leaving the Eagles) but opportunity to coach at Alabama and under Saban was too good to pass up. On the actual process I can tell you Saban did a lot of interviews and research with this hire. Moreso than any position that I can remember this year and I don't think it was close. I'm told he will have inroads to the Texas kids for the 2022 and 2023 cycles, which would be huge with Banks and Scott departing.

quote:
Horns247's Mike Roach shared his thoughts on what kind of recruiting impact Valai brings to the table.

"He’s a high-energy guy and that energy is infectious to recruits and their parents," Roach said. "In his short time in Austin, he was able to make some really strong connections in state, and especially in DFW. He’s a guy who is constantly on top of his targets, and outworked a lot of schools last year to land his targets. He had Texas in the conversation for national targets like Jaeden Gould and  Kamari Wilson while he was at Texas."

quote:
I have a JUCO coaching buddy in Texas. He had nothing but great things to say about Valai as a recruiter, and thinks he is a rising star on the field. Held him in more esteem than almost everyone on the Texas staff. 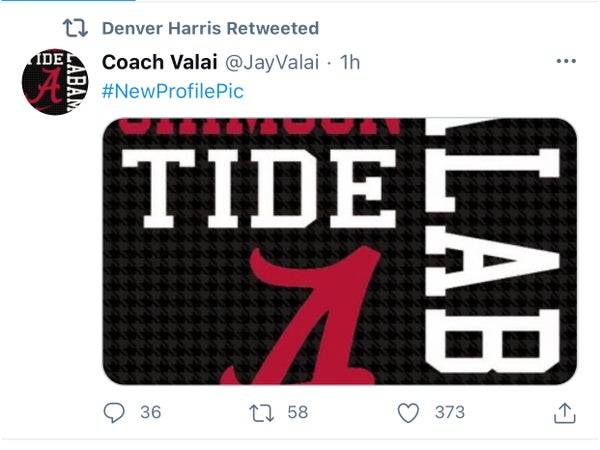 Anyone keeping track of analysts out and analysts in for this year as well?
Back to top
Reply
Replies (2)
OptionsTop
Replies (2)

quote:
Anyone keeping track of analysts out and analysts in for this year as well?

re: Coaching Changes for Alabama(Analysts edition!!!)Posted by MagillaGuerilla on 2/16/21 at 10:48 pm to TidalSurge1
Manrey Saint-Amour is taking Gordon Steele's spot with the OL.
Back to top
Reply
Replies (0)
OptionsTop
Replies (0)

to Everyone
Advertisement
Back to top
RollTide66

quote:
Anyone keeping track of analysts out and analysts in for this year as well?

on 2/18/21 at 3:17 pm to CapstoneGrad06
Official: Alabama announces addition of Jay Valai to coaching staff (BOL) 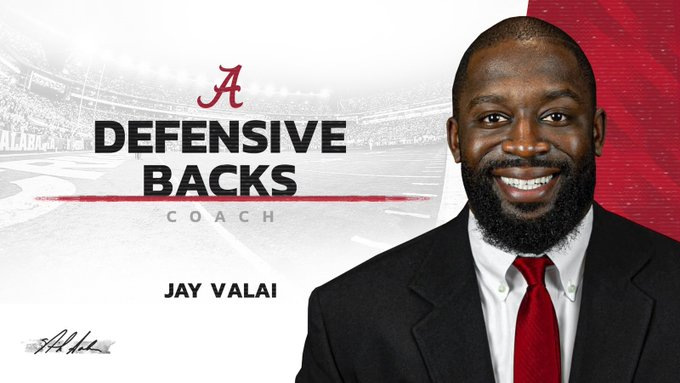 on 2/18/21 at 7:22 pm to Sebastian
Valai puts us in a better position with Denver Harris. Texas probably still leads for him, but we'll should give them one hell of a fight with Valai.
Back to top
Reply
Replies (0)
OptionsTop
Replies (0)

I think this is going to have more of an impact than a lot of people realize. They have a lot of time in working with Saban.

on 2/19/21 at 5:42 am to TidalSurge1
I think Valai will be an amazing recruiter, think this hire will be very good
Back to top
Reply
Replies (1)
OptionsTop
Replies (1)

re: Coaching Changes for Alabama(Analysts edition!!!)Posted by South Alabama Tide