re: Bama Football TidingsPosted by Brostache48

quote:
Nick Saban: "We had three good days with fundamental-type practices. We started yesterday on preparation for this next game."

quote:
Saban on WRs: "I think the guys are stepping up and doing a good job."

quote:
Saban: "We don't have any new updates on injuries or anything like that. We've got guys practicing and doing the best they can."

quote:
Saban: "Chris Allen is doing what he can do, and it's a tough rehab for the injury that he has. I think everybody is doing a good job trying to get him where he needs to be. But that's still pretty much up in the air."

on 12/20/21 at 5:39 pm to Alabama_Fan
-- Nick Saban said “for the most part” he is pleased with how players are “pushing through.” He said players need a process of not “taking for granted” that you can pick up where you left off in practice.

-- “We’re also being very conscious with our players about taking care of themselves, social-distancing, all those types of things, so we can manage our way through some of the flu that’s going around. Not just COVID -- stomach virus and things like that.”

-- Saban said Alabama will have a “normal week” of practice in Dallas beginning Sunday when it arrives.

-- Saban said there are no updates on injuries. “We’ve got guys practicing and doing the best they can.”

- Asked about receivers after the loss of John Metchie, Saban said players are “stepping up and doing a good job,” noting Javon Baker, Traeshon Holden and “Agiye Hall is making some good plays.” Ja’Corey Brooks has been playing well and is “also a guy who continues to improve,” Saban noted.

-- Asked about Cincinnati’s front seven, Saban said they are an active and aggressive group that plays a 3-3 stack scheme. “They play very well together as a team. They don’t make a lot of mistakes.”

-- Asked about what sets Will Anderson apart, Saban said anyone is set apart by their mindset and how they “edit their behavior” to accomplish their goals. “Will is A-plus in all those intangible areas, plus he’s got really good physical ability. The guy is an overachiever, even at that.” Saban noted Anderson’s effort, lack of mistakes, and preparation.

-- Asked about Cincinnati’s defense and cornerbacks, Saban said they are “long and good players” who play good man-to-man coverage. “They’re aggressive in the way they play. They’re smart. They got a lot of experience. ... They’re ball-hawkers. They’re all ball-hawkers back there. They really attack the ball. They got a lot of turnovers. It’s really a talented group.”

-- Saban said he wants players to have fun in practice and in the game, but also rest and not put themselves in positions on the road where it could be a “detriment to their brand” or their ability to perform. “We’re going to be there for a while,” Saban said of the six-day trip to Dallas. “I usually let the players decide what the curfews are and that type of thing.”

-- Saban said they allowed players to go home for Christmas break last year and gave them a “care package” that helped explain what they need to do to stay safe. Saban said they have already implemented their policies from last year. “We’re going to keep doing that,” he said. “Am I concerned? I’m always concerned when there’s an issue out there.” He said players need to “respect it” and Alabama has done a good job of vaccinated and has over 90 percent of its players boosted.

-- Asked about Bryce Young’s ability to “make the main thing the main thing,” Saban said he does a very good job of that and does not let external factors distract him very often. “He’s got good ability to focus on the next play and not get too bothered about what happened on the last play.”

on 12/20/21 at 6:29 pm to JoseyWalesTheOutlaw
Saban has been hiding Hall on purpose and will unleash him on Cincy confirmed
Back to top
Reply
Replies (1)
OptionsTop
Replies (1)

on 12/20/21 at 11:24 pm to Panthers4life
Saban finally mentioned AHall and that too without a negative tag line. Means , we might see him a little in the playoffs.
Back to top
Reply
Replies (0)
OptionsTop
Replies (0)

For the past two decades, the two men have been connected by their shared vision of a bruising game. Jenkins wouldn’t call himself Saban’s secret weapon, but others might. 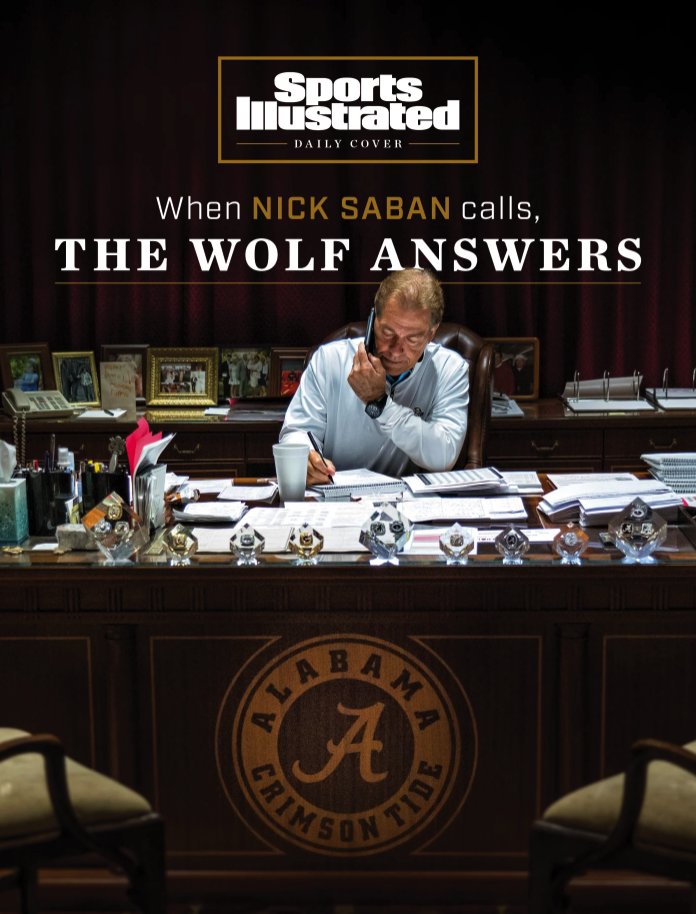 to Everyone
Advertisement
Back to top
JoseyWalesTheOutlaw

on 12/21/21 at 8:43 am to JoseyWalesTheOutlaw
Interesting coach didn't mention Chris Leary. They were clearly trying to work him into the game plan late in the season. His speed alone could provide more space for the offense to work with, and make it harder for a defense to scheme Jamo.

Be incredible to have one of the mentioned players in metchie spot, and Leary In the slot, but I've given up hope of having any speed in the slot until 2023
Back to top
Reply
Replies (0)
OptionsTop
Replies (0)

Posted by MagillaGuerilla on 12/21/21 at 9:29 am to Alabama_Fan
That's a fantastic read, thanks for posting.
Back to top
Reply
Replies (0)
OptionsTop
Replies (0)

quote:
Saban said they allowed players to go home for Christmas break last year and gave them a “care package” that helped explain what they need to do to stay safe. Saban said they have already implemented their policies from last year. “We’re going to keep doing that,” he said. “Am I concerned? I’m always concerned when there’s an issue out there.” He said players need to “respect it” and Alabama has done a good job of vaccinated and has over 90 percent of its players boosted.

Worried about them going home. Rumors that aggies are doing zoom practices as they have had a breakout of the omnicron variant with the majority being their vaccinated players.
Back to top
Reply
Replies (1)
OptionsTop
Replies (1)

quote:
So they got a mild head cold. Got it.

I do not give a shite what you call it but my issue is the NHL just shutdown for a week and other sports are cancelling games. It may be no more than a cold how it affects you but things are getting shutdown.

The last thing we need is right before the game we have half the team get covid and not allowed to play even though this variant is not nearly as severe as the previous variants.
Back to top
Reply
Replies (3)
OptionsTop
Replies (3)

on 12/21/21 at 10:59 am to TideWarrior
Maybe our red blooded Americans will wake the frick up. Right now our men are put to sleep with their 80” inch TVs and football games to see our country being over run. Just don’t interrupt our comforts. FFS. If we could get this country back and it meant missing a damn game. Let it come. Rant over.
Back to top
Reply
Replies (0)
OptionsTop
Replies (0)

Posted by DT55Forever1 on 12/21/21 at 11:04 am to TideWarrior
These people are all getting sick because they went and got these shots and now don't have an immune system worth a crap.

And a lot of them are testing positive without symptoms because the majority of tests are incorrect.

And that's just part of this whole debacle. None of this has to do with health in the first place.
Back to top
Reply
Replies (2)
OptionsTop
Replies (2)