0
Rules:
1) quality hints have already been given, but I will verify information for those who put in the work
2) the person that SOLVES it has to create the next riddle


There are 5 teams, ranked 1st through 5th, with five different names
Each team has a head coach born in a different State.
Each head coach has an OC (first names), a DC (last names) and a color of gatorade they prefer for a victory Gatorade bath.
No coaches have the same OC, DC or have same favorite color

The QUESTION The Head Coach from which State, has a Defensive Coordinator with the last name Landers?


GOOD LUCK and the winner must explain their answer!
This post was edited on 1/9 at 10:59 pm
Back to top
Reply
Replies (5)
OptionsTop
Replies (5)

Hopefully nobody has solved by the time I can actually look at this closely.

Also, no chance I solve it. I'm just not that smart.

re: A riddlePosted by superdawg

re: A riddlePosted by deeprig9

on 1/9/21 at 4:39 pm to ThereGoesHerschel
Your answer to the Riddle is incorrect.

You’re on the right track, but the information you provided was close, but not correct
This post was edited on 1/9 at 4:41 pm
Back to top
Reply
Replies (0)
OptionsTop
Replies (0)

to Everyone
Advertisement
Back to top
fibonaccisquared

on 1/10/21 at 6:22 am to fibonaccisquared
That is correct. just curious, what was your method to solving it?

Also, you can start a new riddle with the 2 ancient when you are ready...but be warned, people on this site get easily butthurt if you wait too long. Just make sure you have the two rules word for word....

quote:
what was your method to solving it

As evidenced by the hour of my submission, this is the only correct method.

(In actual fact, my 3 month old woke me up and couldn't get back to sleep.)

I started out with the old school logic puzzle layout: 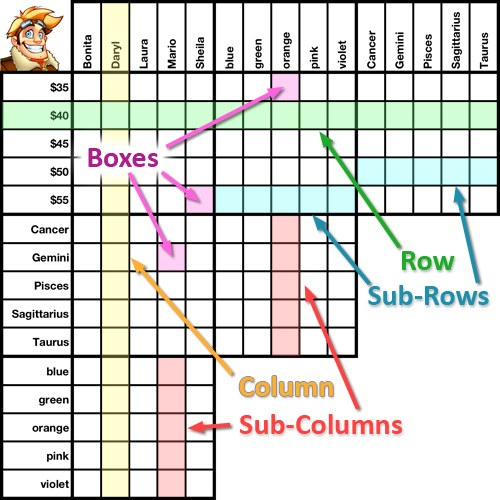 But after going through the clues for a bit, it started to make more sense to just make a layout kind of like I had in my solution. 5 rows, columns for all the other values. plug in the known quantities, then start to shuffle some ideas around and see what would work. I don't have my sequence of what exactly I got in what order, but your clue to the prior poster that they were close led me to believe that once I got the teams in that order but I had different "secondary values" that I was probably on the right track. UGA + Georgia + Red certainly made it a little on the easier side.
Back to top
Reply
Replies (2)
OptionsTop
Replies (2)

re: A riddlePosted by deeprig9

on 1/11/21 at 2:29 pm to fibonaccisquared
Don't wait too long. The keepers of the scroll will be displeased.
Back to top
Reply
Replies (0)
OptionsTop
Replies (0)


Is officially cancelled. I failed. Sorry

Will rework the format and come back stronger