yeah it's quite the black eye

b'ham has sent USC out there in early march/still winter for them before - but there's no excuse for getting swept in 2019 last weekend of april.

everything Kingston has done so far tonight ...he's coached against the game. Mahoney 3B. calling for Mendham to bunt with no outs after a Clarke double/walk to Eyster - pitcher 5 straight balls.

Kingston's got what he's earned so far tonight down 6-2 to a typically milktoast Missouri team through 6.5.

one of the most self-destructive losses for USC since the new ballpark opened in 2009. the fallout...

Kingston's choice to start Mahoney at 3B produced a fruitful 2 errors on 6 chances - .667 fld% - the highlight was a 2-run error. Kingston also had Mahoney positioned towards the 2B side of the cutout near the grass on the leadoff double MO hit to score its 7th run T8 - instead of guarding the line late innings.

as a team USC now has 11 errors in 10 league games. opponents just 5. .967% fielding for Carolina, .987% opponents. Gamecocks have allowed 8 unearned runs to opponents 2 in the 10 conference games.

offensively, Mendham & Burgess each have more hits in league play than Clarke, Sightler & Eyster. that's the funk USC is fighting in SEC play. Gamecocks as a team are hitting .224 in league play through 10 games with 110 total strikeouts.
This post was edited on 4/10 at 8:57 am
Back to top
Reply
Replies (1)
OptionsTop
Replies (1)

all the credit to the players for busting their tails and putting on a show after friday. impressive to see.

Kingston and staff still leave me scratching my head at times, but USC is just 1 game back of 1st in the division as well as overall in the SEC through 12 games. didn't like the idea of Mahoney on friday - he did bust his arse on the diamond all night and scored a run on hustle alone. thought the coaches put him in a tough spot.

Carolina's played themselves into making a serious run at winning the league through 4 weekends.

Brady, Burgess & Brett are becoming their own version of "the killer B's" in 2021.

props to Gamecock fans at Founders all weekend bringing the heat to the opponent. I haven't seen much mentioned yet, but Missouri's team was pretty animated/loud crossing home plate a couple times in late innings friday night. they got what they earned Sat/Sun for it.
This post was edited on 4/11 at 8:01 pm
Back to top
Reply
Replies (1)
OptionsTop
Replies (1) 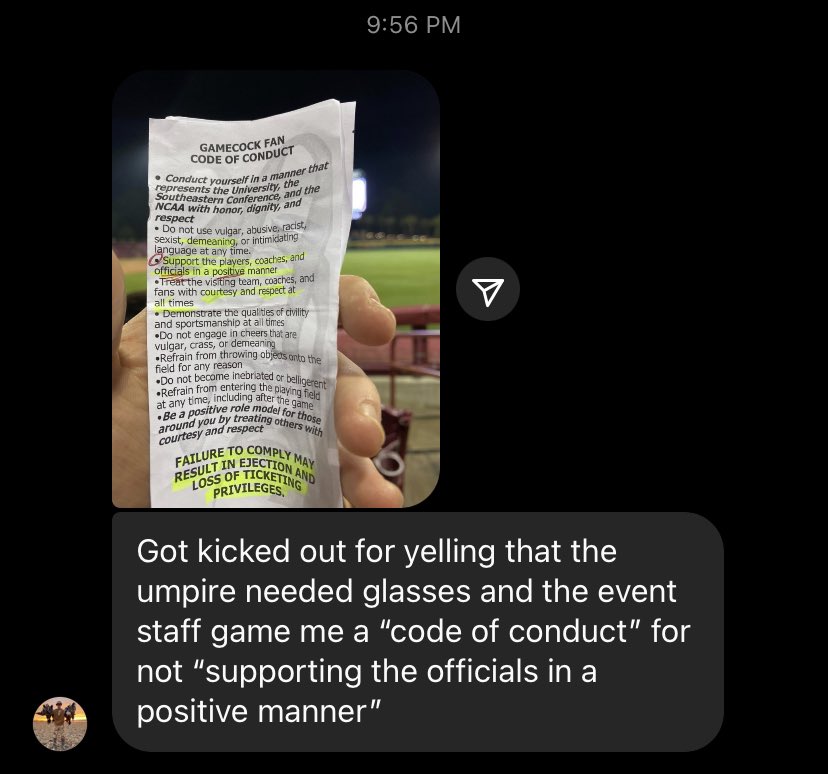 on 4/12/21 at 3:21 am to Lonnie Utah
Nobody got kicked out during game 3. Not one. That pic you started a thread on the main rant site with was from two days ago.

Actually they allowed hecklers to remain game 3 even after Mizzou's coaches raised hell about them and the baseball team and coaches took to twitter afterwards to thank the fans for being persistent about changing the way things were being handled by event staff.

Being pissed about the way it had been handled prior to game 3 is perfectly understandable. However, the way you presented it on tRant made it appear as if that occurred game 3 when it did not. The opposite was the case, actually. Hecklers were allowed to remain. Our coaches even pumped them up during the game. There was a MAJOR shift in how things unfolded yesterday as opposed to previously.
Back to top
Reply
Replies (0)
OptionsTop
Replies (0)

on 4/12/21 at 5:29 am to Lonnie Utah
Lonnie with all due respect why the frick would you put this on the main board? The students thrown out of the 3rd base seats were in the wrong seats and had to move...thats it none were thrown out.

We get enough shite on the main board so we really don't need our own fans pushing false narratives and making our school look stupid.

Extremely disappointed that you did zero research before slamming us.

I think the point was, and it didn't come across very well, was that if THIS is the sort of tickey tacky crap people get tossed over at SC (and I'm sure it was an isolated incident) that there is no doubt why we lead the conference in fan ejections.

I guess I didn't make the nexus between Founders Park and Willy B.

quote:
think the point was,

I have no idea what the point was but I goddamn guarantee you were taught at the Citadel that you don't talk shite about your team in public.

We already have a resident Gamecock fan that is a soy boy snowflake libtard that talks enough shite about us.

to Everyone
Advertisement
Back to top
GetCocky11

Carolina has enough pieces in the clubhouse to do some damage to those teams over the next 12 league games. this is Kingston's first realistic chance to elevate Gamecock baseball back to the national stage USC prides itself on.

if I had to pick 2 road series out of those 4 weekends - the schedule already has them. getting Arkansas & State at Founders is the best scenario for USC this season. it may not play out this year, but Carolina has won it's fair share of ballgames/series in Baton Rouge & Oxford through the years. Baum & Dudy-Noble have been more trouble.

on 4/12/21 at 8:51 pm to SOSFAN
I think his intensity that helps him pitch angry and strike out the side has at times allowed him pitch frustrated.

consecutive walks followed by one of the 18 hits he's allowed in 21.0 SEC innings has led to damage. the UF game is a perfect example of his struggles.

in fairness to Farr, he's been squeezed by SEC umpires more than anyone else on our staff during a weekend. I thought he was better than Rocker on friday of SEC opening weekend. USC gave away 3 & 4 pitch K's & outs to Rocker at the plate. Farr had to work in deep counts/foul balls for his K's & outs.

if Kingston was gonna try something different with Farr this past weekend would've been the best time. next 4 weekends are gonna be greuling. Kerry/Jordan/Farr against Missouri would likely shake out 2-1 at worst but if might have provided that 'break' or 'change' you mentioned to help Farr.

unless things really fall apart in Baton Rouge, we may have to ride things out with friday Farr the rest of the way. ~~ of course LSU would play its best weekend series right before we roll to the bayou.

Gamecocks as a staff are leading the SEC in K's per 9 innings pitched at 12.68.

Jordan has a .136 opponents BA in league play and only Leiter/VU (.065) posts a better one across the SEC

We need to do something about friday nights.
Back to top
Reply
Replies (1)
OptionsTop
Replies (1)

LSU fans have to be thinking 'what the hell just happened here today?'...

Gamecocks had 1 run through their first 15 innings of baseball at Alex Box - 13 runs in the last 8 innings they played.

Wimmer back in the 2 hole with the big hit game one. home run in game two. his time away before the Missouri series took him out of his grove. he's getting it back.

Brady Allen, Colin Burgess & Brett Kerry all big in big moments today. Burgess' 1-2 count single T7 game 1 - right after Mendham led off with a single will go largely unnoticed but if he strikes out there it changes everything else that was to come.

Allen picking up Callil who was HBP & Wimmer was the arrow to their heart. LSU in that stadium would've likely won had the game moved B7 tied at 2. Brady made sure it didn't. Kerry 3 up - 3 down. ballgame.

Gamecocks stunned LSU so bad to win game one - that game two was a TKO shutout 9-0.

6 Gamecocks had 1 rbi each in game two. a 7th, Mendham - had 2 with his HR. Sanders controlled the LSU lineup all game.

this ballclub hits with spurts of consistency - but it's somehow 10-5 midway through league play. they've won 4 straight series since winning Sunday in Nashville. Brannon Jordan is quietly one of the most effective pitchers in the SEC.

We cannot continue to lose Friday and expect to win the next 2, especially with what we have coming up...it's a great time to switch it up with a longer rest since we don't play tomorrow
This post was edited on 4/17 at 8:47 pm
Back to top
Reply
Replies (0)
OptionsTop
Replies (0)

quote:
have no clue what to make of this team and fridays/game ones

I'm starting to expect a bad fri game and sold sat & sun games. I don't like expecting that. I also didn't like him moving Callil up to #2 in lineup Thursday night.

The SEC is so talented it takes some luck and good bounces to win. Scary but the last 2 weekends were the easiest of schedule except for Kentucky. 4 of the last 5 weekends are all against Top 10 teams.
Back to top
Reply
Replies (1)
OptionsTop
Replies (1)

on 4/17/21 at 9:49 pm to SOSFAN
I may be wrong here but when sanders and jordan are on the bump they guys look way more relaxed at the plate. Farr gives up way too many free passes by trying to be cute, that may be meade calling pitches and having too much confidence in his command, but it's gotta be addressed. I know when I played we played better when a pitcher attacked guys and dared then to swing. Cause if we lost at least they earned it and we didn't press in the field to cover multiple walks.

Im not saying moving sanders to Friday or even shuffling the rotation is the answer, but farr has to fix his approach is all.
Back to top
Reply
Replies (1)
OptionsTop
Replies (1)

on 4/17/21 at 10:01 pm to mikeboss550
Farr had a 4.59 era in sec play...blame bats all you want but you cannot expect to put upb5 runs on true sec Friday night guys...he's been good if he was pitching on Sundays but he's pitching fridays...
And then the pressure is on the rest of the team to pick him up and win back to back games...that won't work with this stretch we are entering
Back to top
Reply
Replies (1)
OptionsTop
Replies (1)