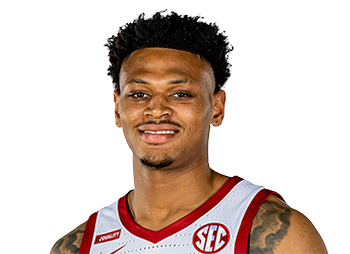 -4th in the ACC in Free Throw Rate

-Two Double-doubles in ACC in play in only 11 games

-Lead his team in Minutes and Steals


Toney aggressively plays the passing lane on the perimeter, gets the steal and finishes against contact with the foul

Fights for the contested rebound, goes coast to coast with the bucket in traffic

Bottom Line: Toney is one of Muss' best pick ups in regards to position less basketball. He can mix it up down low if needed but also a threat from outside to attack or hit the three. Above average defender, especially with his hands in which he excels at getting deflections and steals. Isn't the fastest or flashest looking player on the court but is sneaky athletic. The way he moves on the court gives off some Mason Jones vibes. Should be in the mix for most minutes played with how many different shoes he can fill.
Back to top
Reply
Replies (1)
OptionsTop
Replies (1)

re: New Faces of Arkansas MBB: Au'Diese ToneyPosted by FayetteNAM

Someone said Au Dee Cee but I don’t know for sure.
Back to top
Reply
Replies (0)
OptionsTop
Replies (0)