quote:
No. Easily refuted by looking at the numbers across Europe or even at US states. New Jersey’s a prime example. Same population, similar density, about 15% vaccinated and 10 times the per day new infection rate.

Now explain China, or any other of the large number of countries who have had low COVID deaths with little to no vaccines being administered. It isn't a small number of them. I contend that COVID death rates are falling all over the world, yet less than 5% of the world's population has received one dose of the vaccine and less than 2% of the world's population has received both doses. The vaccine isn't what's causing the drop in deaths worldwide.
This post was edited on 4/6 at 7:43 am
Back to top
Reply
Replies (1)
OptionsTop
Replies (1)

on 4/6/21 at 8:39 am to imjustafatkid
imjustafatkid and others, please refrain from arguing specifics about COVID-19 in this thread. Let's remember and honor the young man who passed instead.
Back to top
Reply
Replies (1)
OptionsTop
Replies (1)

Alabama assistant raises more than $50,000 for family of Luke Ratliff

quote:
Luke Ratliff will be laid to rest Sunday wearing the plaid sport coat once given to him by Alabama assistants Bryan Hodgson and Antoine Pettway.

quote:
TODAY
by Bryan Hodgson, Organizer
Luke's family is overwhelmed with the support and kindness of the Alabama Family and the support from those who aren't members of the Alabama family but were kind enough to donate and show support. I will be ending the fundraiser on Thursday evening. A few people have asked me to leave it open for a couple more days.

Luke's Mother Pam has asked me to thank you for all the love and support.

on 4/6/21 at 11:12 pm to Alabama_Fan
Another nice story on Luke from a station in his home town in North Carolina. This one has more details from his mother of his illness. Apparently he never tested positive for COVID (including three tests the week he passed away). Based on symptoms and the course of the illness, doctors suspect it was COVID.
(Note: This is just information provided by his mother - it’s not intended to spark a debate on the pandemic.)

quote:
His mom wants everyone to remember her boy: the son of a North Carolina highway patrolman, the coach of his brother’s Special Olympics team, and the fan who captured the hearts of the Crimson Tide.

FOR MY PAL, LUKE RATLIFF
Back to top
Reply
Replies (1)
OptionsTop
Replies (1)

on 4/7/21 at 9:24 am to Alabama_Fan
Saw in another thread: Arkansas coach Eric Musselman and many Arkansas fans collected money to buy a floral arrangement for Luke's service. They donated enough to purchase ALL the flowers.

quote:
Saw in another thread: Arkansas coach Eric Musselman and many Arkansas fans collected money to buy a floral arrangement for Luke's service. They donated enough to purchase ALL the flowers.

to Everyone
Advertisement
Back to top
East Coast Band

quote:
Apparently he never tested positive for COVID (including three tests the week he passed away). Based on symptoms and the course of the illness, doctors suspect it was COVID.


How many cases of Covid deaths have there been where the person is more or less fine one day and passes away the next? Or maybe he had been sicker than anyone knew?
Back to top
Reply
Replies (1)
OptionsTop
Replies (1)

on 4/7/21 at 7:53 pm to East Coast Band
Nick Saban sends condolences to family of the late Luke Ratliff (BOL)

quote:
Ive only got a couple more weeks before my second shot.

you know 100% of the time when someone is a vegan.

on 4/9/21 at 4:44 pm to m2pro
I was suppose to get my Vaccine today. But I pussied out because the only one around here is the J&J one. I just read that article this morning about side effects causing a Colorado Vaccine station to pause.
Back to top
Reply
Replies (1)
OptionsTop
Replies (1)

on 4/11/21 at 9:32 am to Alabama_Fan
Alabama superfan Luke Ratliff's funeral will be live-streamed from his hometown of Wadesboro, N.C. at Capstone Church in Tuscaloosa at 1 p.m. Masks are required to attend.
Back to top
Reply
Replies (1)
OptionsTop
Replies (1)


And Cecil’s write up from today: 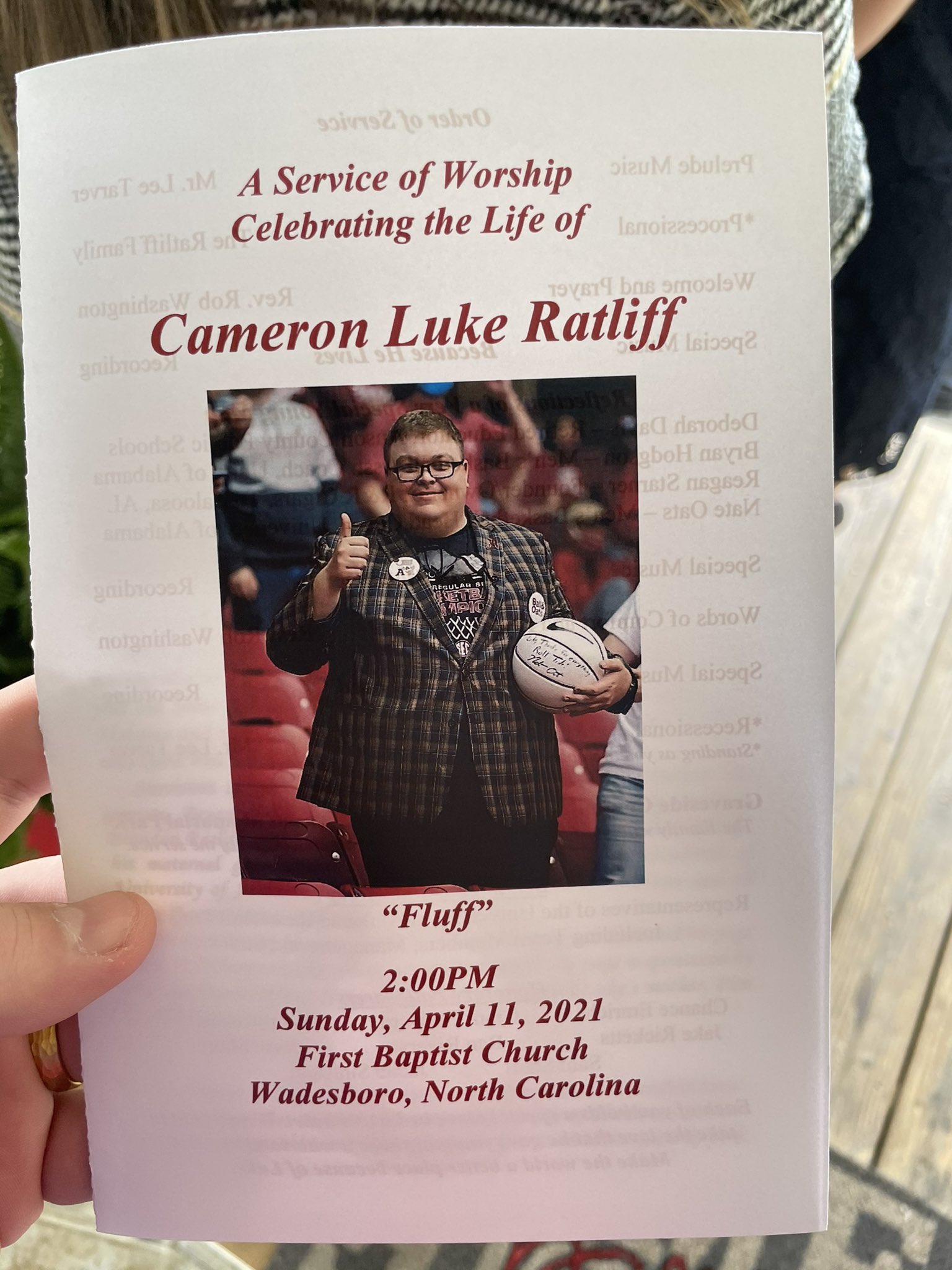 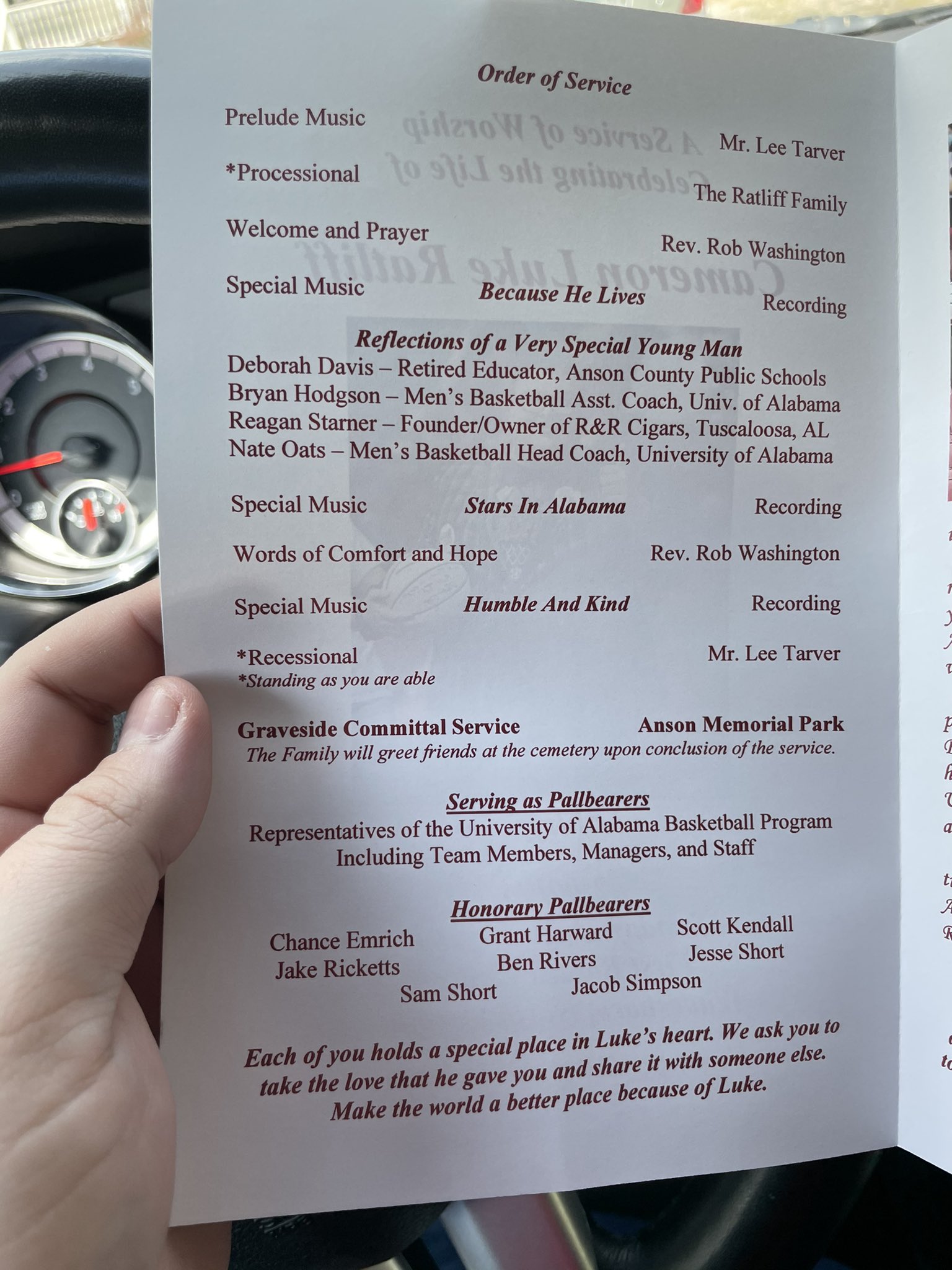 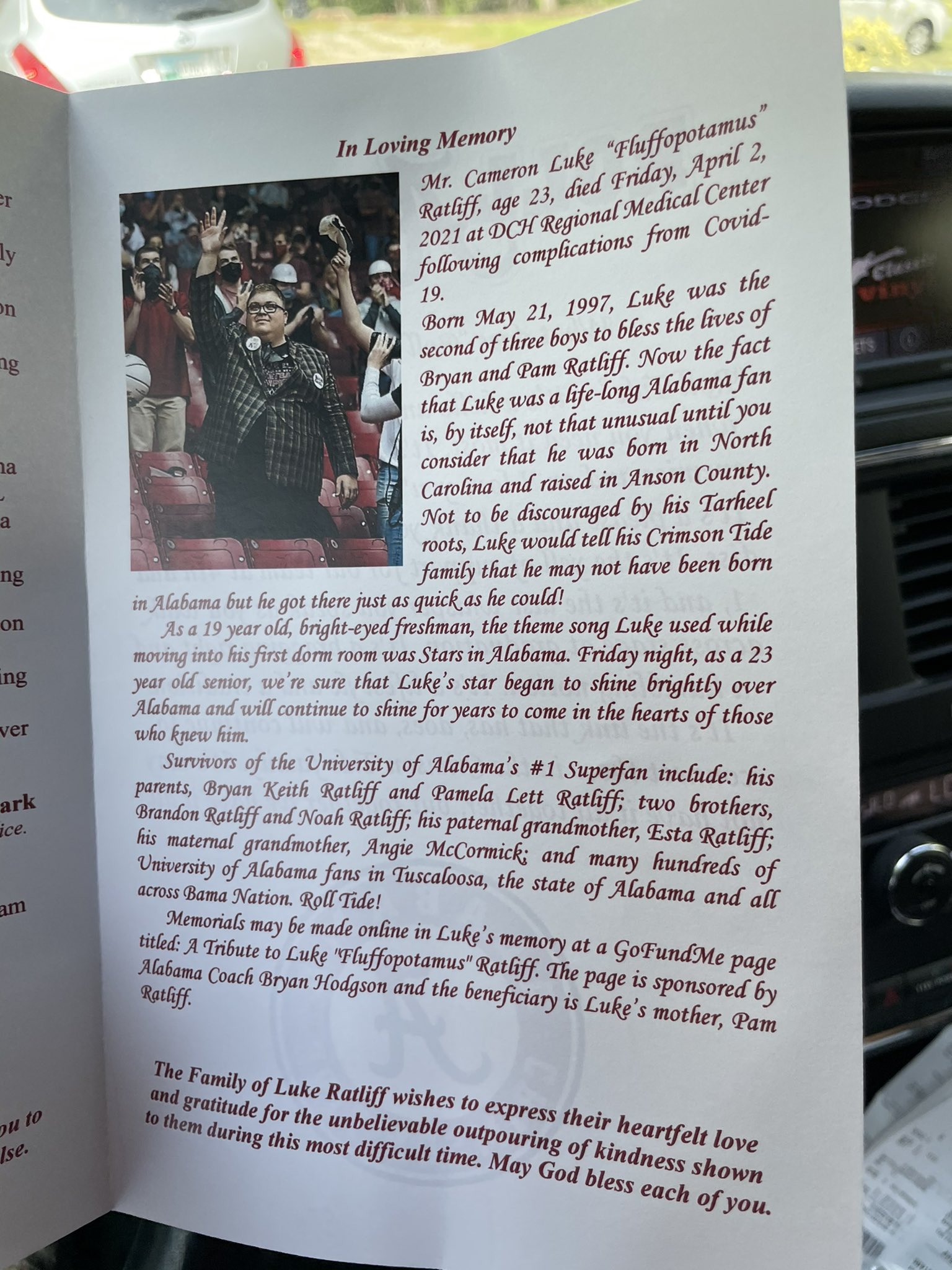 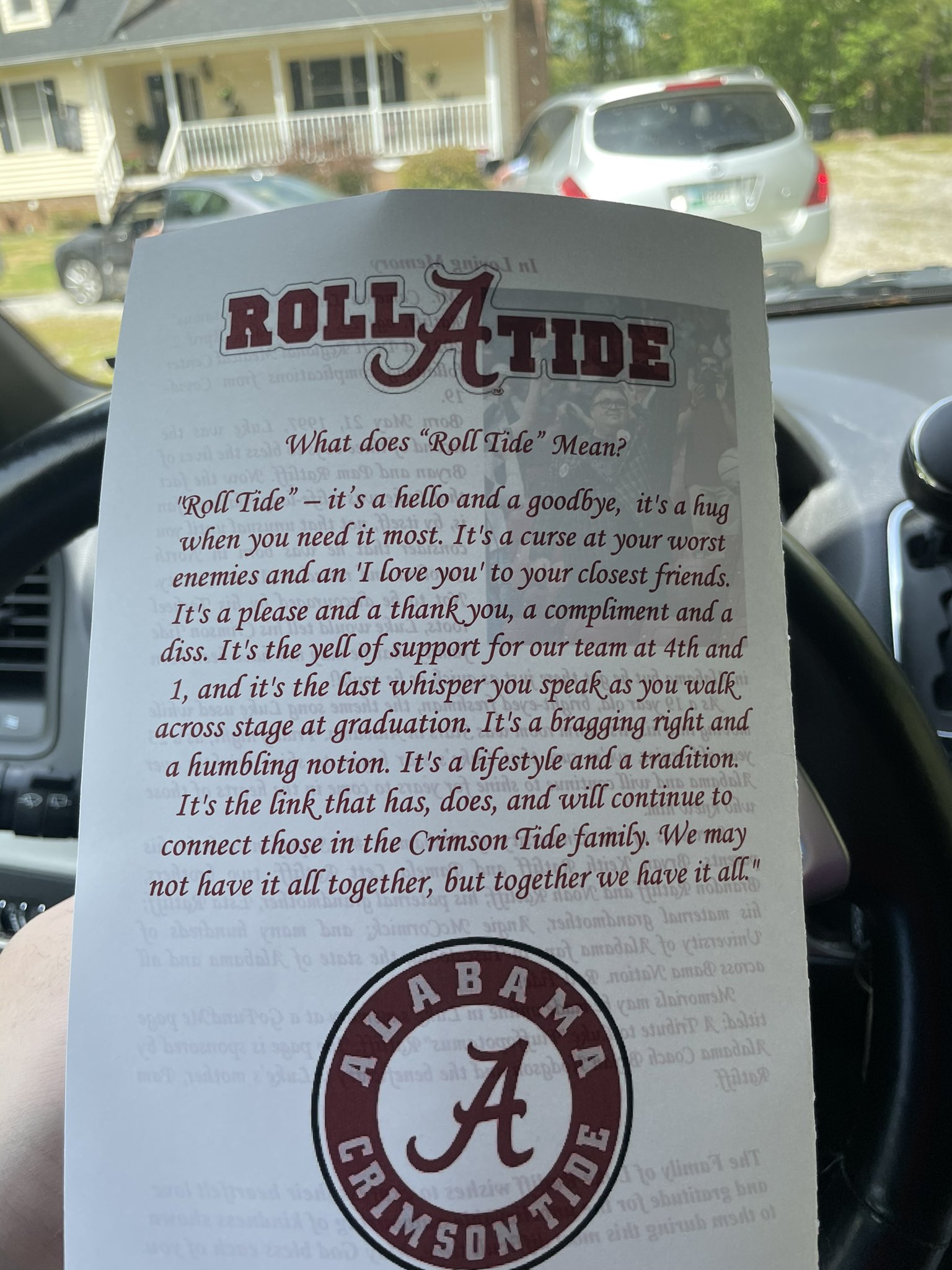 quote:
I have but one regret from this weekend. In honor and memory of @fluffopotamus88, I so badly wish I’d capped this final strike call by saying: “Beat their arse like a rented goat.” RIP Fluff. We’ll never forget you. #RollTide

quote:
Thank you so much to everyone who helped raise over $65,000 for the Ratliff family during this tragic time. The love was definitely felt by the family!

quote:
“The world is a better place for having him and I’m a better person for knowing him”